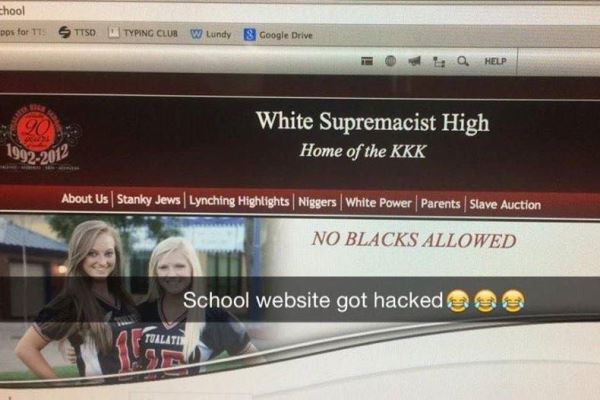 This Snapchat screenshot  of an apparent hack into the Tualatin High School website shows tabs of the homepage replaced with racist rhetoric including “Niggers” “Lynching Highlights” and “White Power.” The picture was shared more 100 times and favorited more than 80 on Twitter alone.

A picture of what initially appeared to be Tualatin High School’s website hacked and filled with racist rhetoric is being denounced by school officials as a mockup—nonetheless once it found its way to social media the image went viral amongst the student body.

Now administrators are investigating the picture’s origins and just how to address the attack that left the ‘Home of the Timberwolves’ looking like the “Home of the KKK” for a few days.

Words like “Niggers,” “Stanky Jews,” “Slave Auction,”  “Lynching Highlights,” “White Power,” and “No Blacks Allowed,” were just some of the charged language found in the image of what appeared to be the Tualatin High website on Feb. 11.

School officials say that picture was shared online by a student and quickly went viral with the image being re-tweeted more than 100 times and favorited more than 80 in less than 24 hours.

Following an investigation, sparked in part by The Skanner News’ inquiries, Tigard-Tualatin School District spokesperson Susan Stark Haydon said the school’s site had no evidence of being hacked or edited.

Though school officials have not wrapped their investigation, they tell The Skanner News they believe two Tualatin High students are to blame for the picture’s origins and subsequent unveiling on social media.

“Truly everybody who’s seen it is angry about it and upset about it,” Haydon said. “We feel terrible that [the people] did it, and we’re not taking it lightly.”

Assistant Principal Gregor Dinse says the school doesn’t accept racism in any form, but until they find out exactly who created the image and their intent, he cannot say how severe the punishment would be.

Nonetheless, Dinse says this instance highlights the need for the equity work that the school—which is just over 20-years-old—has been engaged in over the last 8 years.

“You see something like this happen and even though it might have been one student doing it as a joke, it really does send a loud reminder to us that we have a lot of work to do whether that is addressing the racial achievement gap or people making insensitive comments,” he says. “There’s still a problem with racism in our society, we still need to actively address it -- we can’t just think that the work is done because we’ve done a few workshops with teachers.”

The website Gawker reported a similar case in January as a hack after a picture circulated of what appeared to be a Virginia school district website including the word “niggas.”

Portland web developer Jim Dee explains how someone could make it appear that they had hacked a website without in fact doing so.

"It's impossible to say, based on a Twitter photo, whether a website has actually been hacked," Dee says. "There are many very convincing ways to go about producing convincing fakes. Photoshop would be one. But, even easier and better would be for someone to make changes to the site's text and code on their local computer. That does not change the actual web site, and then they do a screen-grab of the supposed hack. I suspect that's what's going on here."  The attack comes not only during Black History Month, but at a time when the Tualatin area’s communities of color are growing.

According to The Oregonian, Tigard-Tualatin’s minority student population doubled in the last decade to include more than a third of the district.

In the city of Tualatin alone, the Black population saw a nearly 50 percent increase, from .79 percent to about 1.2 percent of the city’s 26,000 residents.

At Tualatin High current statistics show enrollment at 1,752, with Black students accounting for 1.8 percent of the student body.

The district’s racial equity plan, published in 2010, notes that any significant focus on systematic-inclusion only began happening as the suburban community saw a rapid uptick in diversity.

“The major changes in our student demographics had occurred only recently. Our staff turnover had not occurred at the same rate, and certainly did not reflect our student population,” the plan reads. “It was obvious that we did not have the in-house skill to begin working effectively to close our racial achievement gap.”

Despite these changes, Dinse says administrators are “contemplating” how and if they will address the greater student body about the briefly viral sensation.

“I could see this as being something that is brought up with either student groups or staff groups an example of kind of hateful speech out there,” he says. “But there’s also that fine balance, with something like this that most kids haven’t seen, you bring it up, and of course that spawns curiosity and kind of promotes it rather than lets it die down.”

Teaching Tolerance is a program created by the Southern Poverty Law Center meant to foster equity in schools across the nation. Maureen Costello heads the Teaching Tolerance program nationally, and says she would advise Tualatin High administrators against letting this issue go unaddressed—especially in the face of its relatively new plan for cultural competency.

“It’s never a good idea to hope that it goes away,” Costello says. “Some people in that community probably feel really, really violated by this. It happened. The best thing to do is address it. It’s really a great opportunity for the school to have a conversation between parents, teachers, students and the community about what they stand for.”

Costello went on to compare the picture with a swastika being spray-painted on campus.

“Great nobody hacked into your system—your system is secure. But [the incident] happened. If someone had spray-painted a swastika on the school’s building would they ignore that?”

Tualatin High School is gearing to celebrate its Unity Week promoting inclusiveness of all people on Feb. 24.

Visit the Teaching Tolerance website for free resources on creating an equitable schooling environment at www.teachingtolerance.org