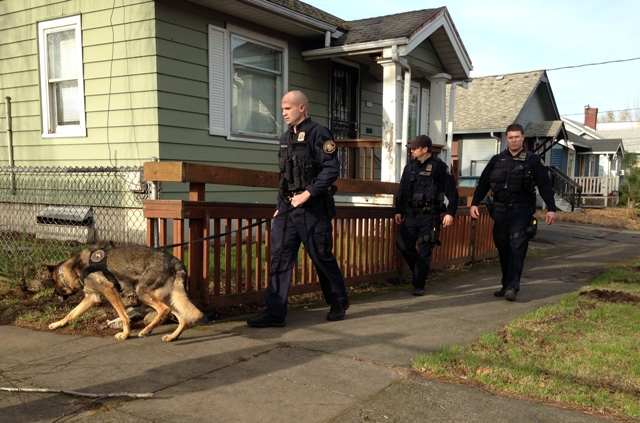 PHOTO: A canine unit searched the block around where the shootings took place, at Borthwick and North Killingsworth Court. Lisa Loving photo

Police said the two teens and one 20-year-old male were all conscious when they were transported to Legacy Emanuel hospital, but the shooter got away.

One of the victims has reportedly been identified by his aunt, Tanisha Franklin, as 17-year-old Rosemary Anderson High School student Labraye Franklin.

Another 19-year-old female was grazed in the foot by gunfire and treated by EMTs on the scene.

Just after noon on Friday, the Portland Community College emergency alarm went off and more than a dozen police cruisers sped down North Killingsworth Street to the corner of North Borthwick and Killingsworth Court, where the shooting took place.

Police from the Fairview Police and Multnomah County Sheriff’s office, as well as the ATF and FBI were on the scene alongside Portland Police.

Portland Opportunities Industrialization Center president Joe McFerrin said he was en route to a meeting with Juvenile Justice when he got the call from a staffer that there had been a shooting near the school; he then re-routed directly to the school.

Though staff at the alternative school were still deliberating next steps Friday evening, McFerrin told reporters that he believes classes will resume on Monday.

Lynne Black, who is preparing to graduate from Concordia University, was interviewed by Portland Police immediately after the shooting as a witness.

Black told The Skanner News, after hearing several shots she saw three Black males fleeing across North Killingsworth Street, one who was visibly in possession of a gun.

All local schools – PCC, Jefferson High School and POIC – were put into lockdown as the victims were rushed to the hospital and a canine unit began a yard-by-yard search of the blocks surrounding the site.

The teens were shot right on the spot where a local muralist had worked with youth from the group Striving to Reduce Youth Violence Everywhere to paint a ‘peace mural’ on the street last summer.

Commander Kevin Modica who spent much of his time on the scene with staff at Rosemary Anderson and Portland Industiralization Center said  initially he did not give the location of the shooting much thought but says “the message of the mural still stands.”

Pete Simpson reported at a press conference  there has not been such a shooting within two blocks of the scene for more than four years.

Joe McFerrin II, director of the POIC, was honored by The Skanner News and the Portland Royal Rosarians in 2013 as “Newsmaker of the Year” for his work in helping young people graduate from high school and find jobs, and also for expanding the program into East Portland.

Mayor Charlie Hales who visited the scene of the shooting, also took a trip to the hospital where the kids were being treated.

Police have yet to detain the alleged shooter nor the two associates seen fleeing from the scene.