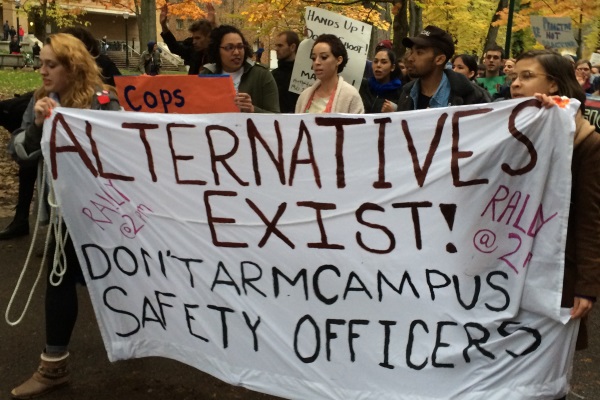 Of The Skanner News
Published: 04 December 2014

A decision on whether to add armed Portland Police to the campus of Portland State University draws closer with the school’s board of trustees set to make the final decision in December. Photo by Donovan M. Smith

The final decision on whether to add armed police officers to Oregon’s largest public university, Portland State University, may be handed down this month from the school’s Board of Trustees.

Last week, students, activists, and community members protested at the school’s downtown campus before a public forum on the nearly $1.5 million proposal to increase campus security’s power and training -- and eventually arm them with guns.

Right now the school is spending $2.6 million on public safety annually; the $1.5 million proposal would be in addition to that.

The proposed plan comes from state legislation passed in 2011 giving the State Board of Higher Education authority to allow campuses in the Oregon University System to create their own police force.

Students have been speaking out against Portland State’s proposal all year.

T.J. Love, a student at the university, penned an op-ed in the school’s newspaper in October. In the article Love, who is Black, detailed an experience where his status as a student was allegedly questioned by campus police.

He writes, “…but ultimately I decide not to escalate the situation partly out of fear, but also because I’ve become resigned to this experience as a black man in Amerikkka. I thought that CPSO were cops and I didn’t want to get shot dead, which is something white police officers are wont to do anytime there’s any melanin involved.”

However, some say that level of protection is not enough for the school, which is less than a mile from Portland Police’s central precinct.

Currently, campus security officers already have the authority to perform “stop and frisk” and can arrest people if they have probable cause; however they aren’t allowed to carry guns, and aren’t considered full peace officers under Oregon law.

Two PSU security officers who spoke at the forum said that in particularly volatile situations they feel underprepared. They also pointed to their inability to provide welfare checks on students.

The officers testified that if a gunman were on campus – unarmed officers would be powerless to stop him.

Under the proposal, some of the security team would undergo an 18-month training headed by Portland Police to become sworn officers.

At the Nov. 24 protest, protestors called for alternative safety measures.

“PSU don’t militarize, that’s not safety in our eyes!” and “invest in things that make us safe!” filled the air from the crowd of nearly 80. Speakers called for additional funding into more lighting on campus, phones, campus escorts, and mandatory conflict resolution classes for students, among other suggestions.

Tom Hastings, a PSU professor of conflict resolution, spoke at the rally; he says he is never in support of guns.

“The last thing we need is these guys and gals with guns,” he says.

Because PSU’s incoming freshman class is set to be the most diverse the school’s ever had, Hastings believes continual policing on campus could also lead to profiling of students.

“We’re getting more people of color and we’re getting more international. People know when they’re marginalized, profiled, and targeted, they are more likely to be a victim of the police than to be helped by the police. That is increasingly going to be the case at the PSU campus.”

The university said response time for the city’s police bureau in a non-emergency situation can be up to 20 minutes. If there were an active shooter, the armed police officers assigned to the university could respond within 60 seconds, the university claims. It should be noted that the PSU campus is less than a mile from the police’s downtown precinct in downtown.

Referencing the recent high school shootings at Marysville-Pilhuck near Seattle; Reynolds just outside of Portland; and November’s Florida State University gunman, PSU spokesperson Scott Gallagher says there is a benefit to having armed officers on campus.

Members of the Board pointed to data suggesting that the police presence would be light, compared to other universities its size.

The final decision on whether to add police will be handed down earliest by the PSU Board of Trustees Dec. 11. Gallagher says, when if passed it would be at least 6 months after the date before armed officers would be on campus.