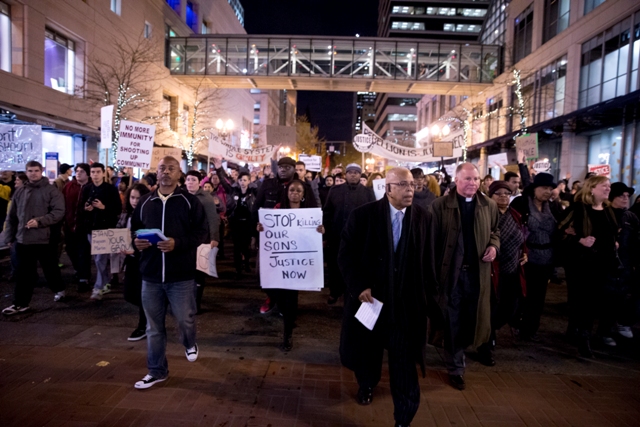 Community leaders from left Ronnie Herndon of Albina Head Start; Midge Purcell of the Urban League of Greater Portland; Rev. LeRoy Haynes of the Allen Temple CME Church; and Rev. Mark Knutson of the Augustana Lutheran Church, march Tuesday, Nov. 25, 2014, in Portland, Ore. People protesting the grand jury decision not to indict a police officer in the shooting in Ferguson, Mo., of Michael Brown took to the streets in cities across the U.S. for a second day. (AP Photo/The Oregonian, Beth Nakamura)

PORTLAND, Ore. (AP) — A police officer who was not supposed to work the Ferguson protest in Portland ended up driving the van that took some protesters to jail.

Sgt. Pete Simpson told The Oregonian that Officer Richard Storm worked overtime as custody van diver at Saturday night's demonstration because of limited availability of other officers on the weekend.

Storm was one of three Portland officers who had posted an image of the Portland police badge on personal Facebook pages with the message "I am Darren Wilson" to show support for the Ferguson police officer.

Portland Police Chief Mike Reese called the posts inflammatory and ordered the officers to remove the images of the badge. And, police later said the officers who posted the images would not cover Ferguson demonstrations in the city.

Rev. Jesse Jackson called for peace and perseverance on Sunday as he urged congregants in Portland to keep fighting for racial justice.

He gave a morning sermon at Emmanuel Temple, a day after 10 people were arrested in Portland following a protest related to the Ferguson, Missouri, police shooting.

But Jackson took aim at other systemic and national racial disparities, including the lack of people of color on the boards of technology companies.

He also called on President Barack Obama and others in Congress to go to Ferguson, according to OPB.

"It's discouraging sometimes, but we shouldn't give up," Jackson said. "We have won so many battles."

Jackson also spoke at a rally at the Justice Center in downtown Portland Saturday night, where he urged protesters to be vigilant but nonviolent.

Portland police say that after Jackson left that rally, some protesters marched around downtown and sporadically disrupted traffic. Officials say some bottles were thrown at officers and a police car was damaged.

Police say the arrests came Saturday night "after a large group of protesters laid down in the street and refused lawful orders to clear the roadway."

Police said Sunday that seven adults were booked into jail, two were given citations to appear in court and one 17-year-old was released to his mother. They face charges that include disorderly conduct.