'Save the Good Old Houses' Offers Lessons From History 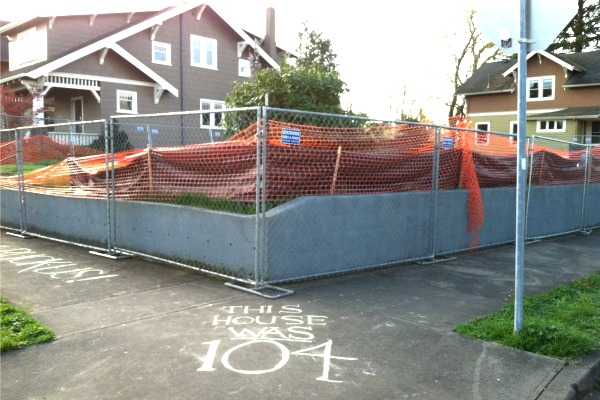 A demolished house in NE Portland inspired a small protest. An event on Nov. 18 aims to bring together community members who are concerned about infill development. Photo by Lisa Loving

On the corner of 16th and NE Going Street lies a vacant lot surrounded by a chain link fence and bright orange construction netting. A concrete stairway leads up to yard of 2-foot-tall bleached yellow grass with an excavated pit outlining where a house once stood.

A year ago, a 104-year-old house stood on the lot. It was painted yellow and featured a distinctive porch that wrapped from the front door to the side yard. Porch columns and a chimney were built from brown, grey, and golden yellow river rocks.

On Feb. 28, the house had been sold to the Portland Development Group for $380,000. By April 4, they received a demolition permit and by the April 7, the house had been demolished. Permits have since been filed to divide the lot into two and to build two townhouses on the property. 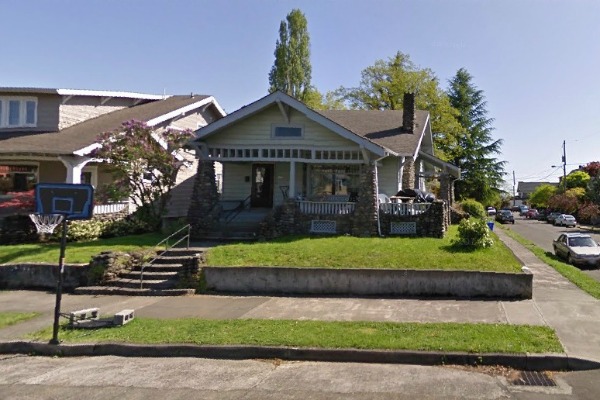 This story of infill development is playing out in neighborhoods across the town, from Eastmoreland to Laurelhurst to Alberta, where old houses are being demolished to make way for high-price, higher density townhouses.

For writer and historian Sandy Polishuk, this development battle has deep roots in Portland history.

“It's an ongoing struggle to maintain the history as it is reflected in the physical things around us,” she said.

To that end, Polishuk and her group the History of Social Justice Organizing host an event next month documenting successful community efforts to protest the demolition of three historic houses in Northwest Portland years ago.

The event is Tuesday, Nov. 18 at 7 p.m., at the Architectural Heritage Center, 701 SE Grand Ave. The discussion is free and open to the public.

On May 23, 1989, developer Philip J. Morford ordered the demolition of houses on NW Overton Street one day before the Portland Commission on Historical Landmarks was to consider their historical and architectural value.

The neighborhood responded by protesting. Some sat on the porch of the house, adamantly refusing to move. That day, 23 people were arrested; most were charged with trespass and obstruction of judicial administration.

After the showdown, the Northwest District Association and the neighborhood negotiation committee managed to save one house in its original place and move two other houses nearby.

For Polishuk, the demolition of old houses is more than an issue of nostalgia; it is a social justice issue where communities need to voice their concerns.

“I think that community empowerment is a social justice issue,” Polishuk said. “These communities care very much about the character of their neighborhood and their ability to have a say in their neighborhood.”

For Polishuk, activism doesn’t get any more grassroots than when neighbors fight against development. She described the scene 25 years ago when protestor Frank Dixon used an old brick-style cellphone to call everyone he knew to come to the protest.

“He's calling everyone he can think of, standing on this porch across the street, letting everyone he could think of in the neighborhood know what is going on, and people came pouring in.”

Dixon is the current state chair of the Democratic Party of Oregon and one of the speakers at the Save the Good Old Houses forum. He is joined by Nancy Nesewich and Ruth Roth, who were some of the first people to be arrested that day; Joleen Jensen-Classen, who coordinated the negotiation process; and Rick Michaelson who worked with Dixon to reach a final settlement.

In addition to this panel of speakers, the event will have copies of the May 1989 NW Examiner paper covering the protest in minute-by-minute detail. Polishuk is trying to find a song “Save the Good Old Houses” that was created on the day of the protest if the cassette tape can be found.

Polishuk hopes that anybody who comes to the event will learn about community activism and how to learn from other community successes. She was inspired to create presentations on the history of social justice from meeting young activists in the Occupy movement who didn’t know about organizers who had worked before their time.

And for those who are worried about the demolition of good old homes in their neighborhood, Polishuk encourages them to attend the event and meet other people who have been through similar struggles.

“It’s very helpful… to know that you are not alone, that your neighborhood is not alone.”

For more information, go to the History of Social Justice site