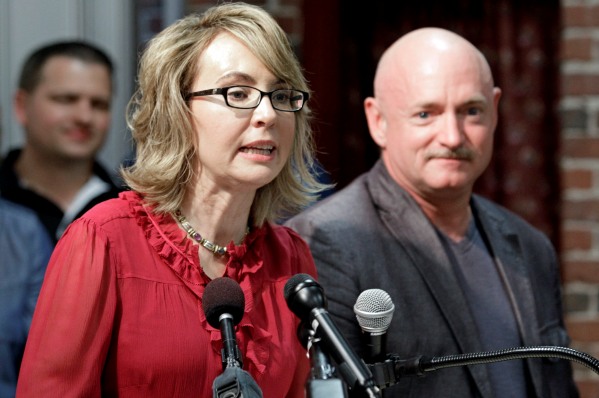 Former Arizona Rep. Gabrielle Giffords, accompanied by her husband, retired astronaut and combat veteran Capt. Mark Kelly, speaks during a news conference at the Millyard Museum in Manchester, N.H. July 5, 2013. A book by Kelly and Giffords details their transition from survivors of a mass shooting to advocates and fundraisers for stricter gun laws. "Enough: Our Fight to Keep America Safe from Gun Violence" gives insights into the couple's life after the 2011 shooting that left six dead and 13 injured, including Giffords, who was shot in the head and remains partially paralyzed. (AP Photo/Mary Schwalm, File)

The former Arizona congresswoman urged law enforcement officials and domestic violence advocates in Maine on Tuesday to help her bring about change, saying "We can lead the way."

Giffords, who was severely wounded by a gunman in 2011, spoke haltingly but clearly, telling the group, "We can win elections. Please join your voice with mine."

Giffords' advocacy group, Americans for Responsible Solutions, calls guns and domestic violence "a lethal mix," noting that abuse victims are more than five times more likely to be killed if the aggressor has access to a gun.