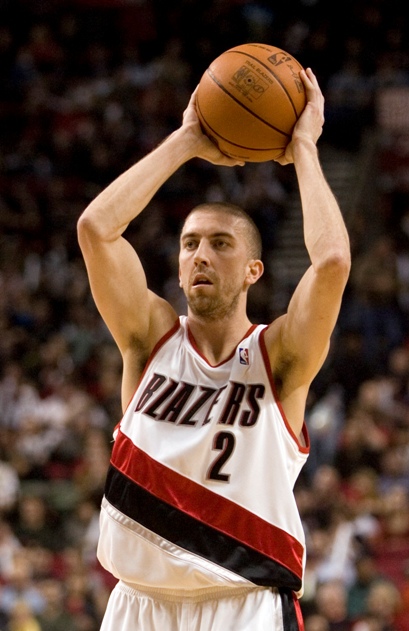 In this Jan. 25, 2010 file photo, Portland Trail Blazers guard Steve Blake is shown during the second half of their NBA basketball game with the New Orleans Hornets in Portland, Ore. Blake is coming back to the Trail Blazers. A person with knowledge of the deal who cannot comment until it is formally announced confirmed Thursday, July 10, 2014, that the free agent point guard has signed a two-year deal with Portland. The agreement was first reported by Yahoo! Sports. The contract is worth a reported $4.2 million with a player option for the second. Blake has had two previous stints with the Blazers, most recently from 2007-09, becoming a fan favorite before going on to play for the Lakers, Clippers and Golden State Warriors. (AP Photo/Don Ryan, File)

PORTLAND, Ore. (AP) — Steve Blake is coming back to the Trail Blazers.

The team announced the free-agent guard's signing on Thursday. The two-year contract is worth a reported $4.2 million with a player option for the second year.

Blake has had two previous stints with the Blazers, most recently from 2007-2010, becoming a fan favorite before going on to play for the Lakers, Clippers and Golden State Warriors. He kept a home in the Portland area.

"I don't think I could have gone to a team that wasn't playing for the playoffs or playing for the championship, and that's what I expect to have here," Blake told reporters on Thursday. "There is no better place to play basketball. I love it here."

The Trail Blazers can use the 6-foot-3 Blake to help back up All-Star guard Damian Lillard. Mo Williams, who was first off the bench last season, is a free agent this summer and has reportedly talked to the Dallas Mavericks.

"Steve is the perfect fit for our team," Blazers coach Terry Stotts said in a statement. "He brings experience, toughness, leadership, shooting and consistent defense. Steve will be a complement to our backcourt and provide mentorship for our young players."

Blake also has a relationship with center Chris Kaman, who agreed to terms with the Blazers last week. Kaman, who signed a two-year deal worth a reported $9.8 million, will back up starting center Robin Lopez.

Blake's wife, Kristen, posted a photo of Blake and Kaman together while on the Lakers to Twitter, writing: "Steve Blake and Chris Kaman, together forever. #Portlandia."

The two players appeared at a press conference in Portland on Thursday.

"It really is important to us that guys we bring here want to be here," general manager Neil Olshey told reporters. "They're both gamers, they're about winning."

Blake first signed with the Blazers as a free agent in 2005 then was traded the next season to the Milwaukee Bucks. He signed with Portland again in 2007 before being traded to the Clippers in early 2010.

Blake's best season came in 2008-09 with Portland, when he started and averaged a career-high 11.0 points.

Blake was the 38th pick of the 2003 draft by the Washington Wizards after four years at Maryland.