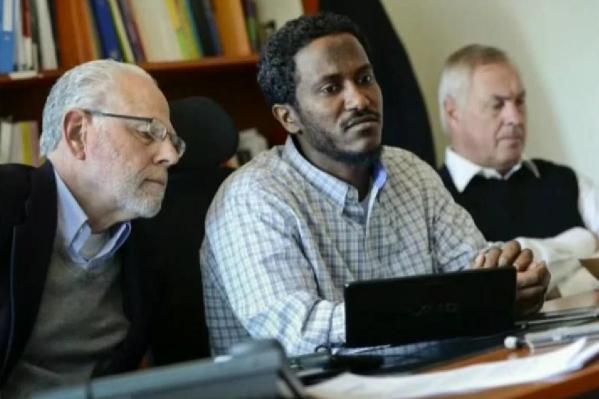 PHOTO: Yonas Fikre center with lawyers now lives in Sweden after being put on no-fly list

PORTLAND, Ore. (AP) — A federal judge dismissed several claims from a former Portland resident who said he was tortured in the United Arab Emirates at the behest of the FBI and put on the U.S. government's no-fly list.

The ruling Thursday from U.S. District Judge Anna Brown formalizes statements she made during a March hearing but gives Yonas Fikre (YOH'-nahs FEE'-kray) until June 27 to rewrite his complaint, which names the FBI, U.S. Attorney General Eric Holder and others, The Oregonian reported Friday (http://is.gd/LusrZw ).

Fikre is a Muslim who lived in Portland before going overseas on business in 2011. He said Portland-based FBI agents demanded that he spy on a mosque in the city during an interview in Sudan. When he refused to cooperate, Fikre said they had him held for 106 days in a United Arab Emirates prison, where he was abused.

The FBI and State Department have declined to comment on the allegations, citing the ongoing litigation.

The State Department confirmed previously that Fikre was held in the UAE capital of Abu Dhabi on unspecified charges but said agency officials visited him and he showed no signs of mistreatment.

Fikre now lives in Sweden, where he sought asylum after claiming he was told by FBI agents that he was on the no-fly list.

Fikre said the FBI agents named in the suit wanted him to become an informant at Portland's largest mosque, Masjid As-Saber, and were angered when he refused.

The lawsuit also challenges the constitutionality of the no-fly list, the secret roster kept by the government of those barred from flying in or over the United States because of alleged terrorism connections. Those placed on the list are not told of their status and not allowed to hear what evidence led to the designation.

Two other lawsuits in federal court in Portland also challenge the no-fly list.

Brown, the judge, dismissed one of Fikre's claims outright — that the government stripped him of his rights as a citizen by refusing to allow him to return to the United States. Brown said the citizenship clause involves an individual's status as a citizen, but is not the basis for protecting a citizen's rights, the newspaper reported.

Brown is allowing Fikre to amend other claims, including allegations that placement on the no-fly list violates due process. Currently, the claims lack sufficient information to be considered, the judge said.