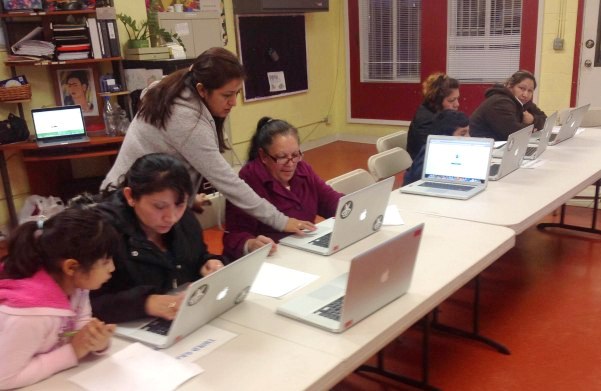 A fast, dependable internet connection in your home can mean the difference between success and failure, in school, at work and in life.

“It is a necessary skill now to understand how to interface with technology,” says Cece Hughley Noel, executive director of the nonprofit Portland Community Media. “It’s a literacy building block that is necessary for success.”

Soon Portland residents could benefit from some of the fastest internet speeds in the country. That’s if the broadband company Google, decides to bring its fiber internet service to the Portland-metro region in 2015.

If Google does come to Portland, the city will have an opportunity to follow through on its own equity promises and allocate some of the fees to closing the digital divide.

Kansas City, Missouri and Provo, Utah were the first two cities to get Google Fiber.  Austin, Texas is next on the list. The company has said it will decide which cities will follow them later this year.

Advocates say it’s crucial that equity for low-income and minority families is on the table from the start.

The 2009 Your Voice Our Communications Technology study that looked at access to high-speed internet found that almost 20 percent of households did not have wireline internet at home. But that same data also showed that among families earning under $30,000 a year, more than 50 percent had no wired internet access at home.

A new study from the Oregon Broadband Council will release updated figures in June.

“It will be helpful to have updated information on connectivity because five years is a long time in the broadband world,” said Mary Beth Henry, director of the city of Portland’s Office for Community Technology.  “I expect there will be more connectivity. It’s become a lot more clear over the last five years how critical Internet connectivity is for jobs, education, everything.”

Students Without Internet Skills are Destined to Fail

The issue is not just simple fairness, but also economic and workforce development, educational and career success. In fact, high-speed internet is now so important that advocates say it should be treated as a utility, just like electricity or water.

University of Oregon education professor Joanna Goode who has researched the issue says students who arrive at university without strong computer skills are destined to fail. Universities don’t require students to understand how technology works, she says. But you can do very little on campus without it.

“Once you walk onto campus, you can't enroll in classes, you can't get financial aid, you can't get onto Blackboard, (software designed for classes) you can't answer emails. If you have no technology knowledge, you will not even survive the first week at most university campuses."

Google was criticized in Kansas City because poor and minority residents were least likely to benefit from the opportunity.

Many simply could not afford to pay $70 a month for the fastest fiber connection. Google did offer a cheaper option -- a slower 5mbps connection, which comes free for seven years once homeowners pay a one-time $300 installation fee. But many residents were renters and the homeowners did not install the devices.

An Oregonian article explains how Google’s service would not be available everywhere in the city.

After meeting with Google staff, Cece Hughley Noel says she feels optimistic that Portland can do better.

“I think Google’s digital inclusion team is really taking seriously the lessons they learned in Kansas City,” she said. “They seemed like a really genuine great group of people. So with the $300 installation fee --they can be flexible in spreading those payments out so people can afford the service.”

The Portland Tribune reports that minorities were left out in the Kansas City plan and city officials didn’t ask for simple concessions that would help connect more people in low income neighborhoods. 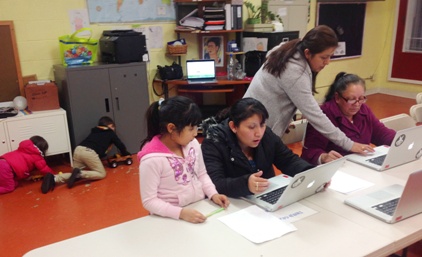 PHOTO: As girl learns with her mother at a Hacienda CDC workshop on digital basics taught by Portland Community Media

Another barrier for many people who don’t have an Internet service at home is that they don’t understand why they might need it. If you don’t know how to use a computer, get an email address, or go online, you may feel too intimidated to make the attempt, she says.

Portland Community Media holds internet basics classes for beginners and partners with community nonprofits – such as Sisters of the Road, Voz, Hacienda CDC, the Q Center and Verde—to reach the people who are least likely to have internet service.

A new franchise agreement would also open the door for Portland City Council to follow through on its own equity promises. The city’s 2011 Broadband Strategic Plan called for a percentage of the franchise fees to be dedicated to closing the digital divide.

“We understand that we have an important role to play in digital inclusion and equity—and resources are critical to addressing the issue,” Henry says.

Under Portland’s proposed agreement, Google would pay a franchise fee of 5 percent of its gross local revenues. The council could put some of these funds into helping people get online.

But several years of back-to-back budget cuts resulted in the recommendation being sidelined.

“This is the first opportunity when we have new revenues and no budget cuts” Henry said.

Across the country nonprofits and municipalities have looked at a variety of ways to ensure more people develop computer skills.

In Minneapolis the nonprofit pcsforpeople gives  computers to low-income people and provides Internet service for as low as $120 a year.

Existing local providers, Comcast and Century Link, also pay a franchise fee that goes into the general fund.  The general fund is used for all kinds of city programs, with the largest being police, fire and parks.

Federal regulators told Comcast and CenturyLink they could complete mergers  but with the condition that they must offer low cost internet access.  Comcast contracts with PCM, to support its digital basics classes. But Hughley Noel says the money is just a start. The nonprofit subsidizes most of the classes.

Both developed programs aimed at very low-income people. To qualify for the Comcast Internet Essentials program a household must have children in K-12 education who qualify for free school meals. It offers a 5mbps service for $9.95 a month. Century Link’s Internet Basics program offers a 1.5 mbps service, also for $9.95 to very families with incomes of 135 percent of poverty or less who qualify for Lifeline service.

Google has reached out to nine metro areas across the country, and will make its decision later this year.  As part of the Portland-area expansion proposal, Google is looking at Beaverton, Gresham, Hillsboro, Lake Oswego, and Tigard.

AT&T also has plans to introduce fiber networks to 21 new cities. Five of its target cities are in California, but it has no plans to bring networks to the Pacific Northwest.