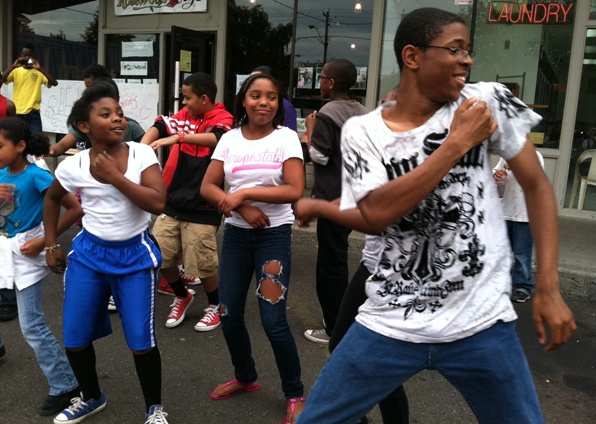 By Helen Silvis Of The Skanner News
Published: 06 May 2014

PHOTO: Youth danced outside the Rosewood Cafe in East Portland in 2012. Many of them went to programs at the Police Activities League youth center on Northeast 172nd, which closed when it ran out of money in Feb. 2013.

And the racial disparities in Multnomah County, home to 49 percent of Black youth and 16 percent of Hispanic youth are worse than for the State of Oregon overall.

Kim Bernard, research director for the department of community justice, distributed and explained a review of the current data on youth in the juvenile justice system at a meeting of the Local Public Safety Coordinating Council, the county-led group that works on criminal justice issues.

Judge Nan Waller, a longtime youth advocate, is spearheading a collaborative effort to reduce those figures. Reviewing the statistics –which are in line with recent numbers – was the first step, she said.

“This doesn’t explain why or anything else; it’s just the numbers,” Waller said at the meeting. “Our next big step is taking a look at the numbers and figuring out what if anything we can do to have an impact on them.”

In 2001 Multnomah County was hailed nationally for its success in reducing the disproportionate numbers of Black and Hispanic youth in juvenile detention.

Community Justice Director Scott Taylor said that while the numbers could seem overwhelming, the county had reduced disparities by changing the way detention staff assessed risk when they evaluated youth.

But Waller said that family supports and youth programs that helped prevent youth from getting into trouble in the first place, were cut in following years, and the numbers began to climb again. We need to put more money into prevention, she said.

“It wasn’t just the risk assessments. It was also the services we had in place,” she said. “That moment when we started to  see overrepresentation growing just paralleled the budget cuts… to services we had in the community – to our family centers where families could go –long before things ever got to juvenile court –to get resources.

“We know, I think, how to do some of this. But it’s not just changing our system. It’s putting in resources to the areas that need resources.”

“He called for action to create a strategic plan to protect youth from all kinds of violence, including violence that leads to overrepresentation in the public safety system,” she said.

Multnomah County Commissioner Judy Shiprack said school districts need to come to the table and work with the group, because of the evidence showing that school suspensions and exclusions put youth at higher risk.

The data also shows that Black and Hispanic youth are less likely than white youth to have their cases dismissed, plea bargained or diverted before trial.

CORRECTION: This article was corrected shortly after it was posted. It originally misstated the extent of the disparities by missing out a decimal point. We apologize for the error.