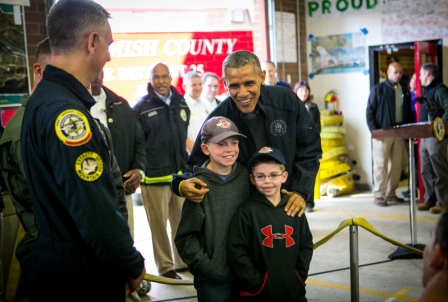 President Barack Obama poses for a photo on Tuesday, April 22, 2014 with Landon Harper, 9, and Levi Harper, 7, sons of Oso, Wash. Fire Chief Willy Harper, as the president visits the Oso Fire Station. He greeted and spoke with rescuers there, near the scene of last month's deadly Oso mudslide. (AP Photo/seattlepi.com, Joshua Trujillo, Pool)

OSO, Wash. (AP) — Swooping over a landscape of unspeakable sadness and death, President Barack Obama took an aerial tour Tuesday of the place where more than three dozen people perished in a mudslide last month. He pledged a nation's solidarity with those who are enduring "unimaginable pain and difficulty" in the aftermath of the destruction.

"We're going to be strong right alongside you," Obama promised the people whose lives were upended when a wall of mud and water swept away the hillside on March 22 and took with it at least 41 lives and dozens of homes.

Obama first boarded a helicopter to survey the awful scene.

Evidence of the mudslide's power was everywhere: trees ripped from the ground, a highway paved with mud and debris, a river's course altered. And in the midst of the awful tableau, an American flag flying at half-staff.

Even as the president flew overhead, the search for bodies continued below. Two people were still listed as missing.

Back on the ground, the president gathered at a community chapel in the small town of Oso, about an hour northeast of Seattle, to mourn with families of the victims. He met separately with emergency responders before speaking in a small brick firehouse about all he had seen and heard on a clear, sunny afternoon.

"The families that I met with showed incredible strength and grace through unimaginable pain and difficulty," Obama said. Then he offered them a promise.

"The whole country's thinking about you, and we're going to make sure that we're there every step of the way as we go through the grieving, the mourning, the recovery," he said.

Obama said few Americans had heard of the tightknit community of Oso before the tragedy but in the past month "we've all been inspired by the incredible way that the community has come together."

Firefighter coats hung on the firehouse walls as Obama spoke, with homemade signs above them reading: "We (Heart) Oso." ''Thank you Oso." ''Oso Proud."

Brande Taylor, whose boyfriend volunteered to work on the mudslide debris field, was glad the president made the effort to visit this rural outpost.

"It is a small community. It's little. It's not huge on the map. But there's still people here who need help, that need the support," said Taylor, who stood near the firehouse. "And they need to know the president is here to support and to help them rebuild their lives."

Kellie Perkins, who lives in Oso, said Obama's visit would help families who have lost so much begin to heal.

"They don't now have houses any more, they don't have anything they own, their friends or relatives are dead," she said. "I think they need this."

At the request of Washington Gov. Jay Inslee, Obama earlier this month declared that a major disaster had occurred in the state, making it and affected residents eligible for various forms of financial aid, including help covering the costs of temporary housing, home repairs and the loss of uninsured property. The Homeland Security Department, the Federal Emergency Management Agency and the Army Corps of Engineers also are helping.

The president repeatedly has stepped into the role of national consoler in times of mourning. Just two weeks ago, he met with families and comrades of those killed in a shooting rampage at Fort Hood in Texas. Three soldiers died and 16 others were wounded in the rampage by another soldier, who killed himself.

Obama also has mourned with the grieving after carnage in Tucson, Ariz., Aurora, Colo., Newtown, Conn., Boston, the Washington Navy Yard — and once before at Fort Hood.

Tuesday's stop in Washington came as Obama headed for Tokyo, the first stop on a four-country visit to the Asia-Pacific region. The president is scheduled to spend the rest of this week and part of next week conferring with the leaders of Japan, South Korea, Malaysia and the Philippines.