Portland's New Light Rail and Pedestrian Bridge Has a Name 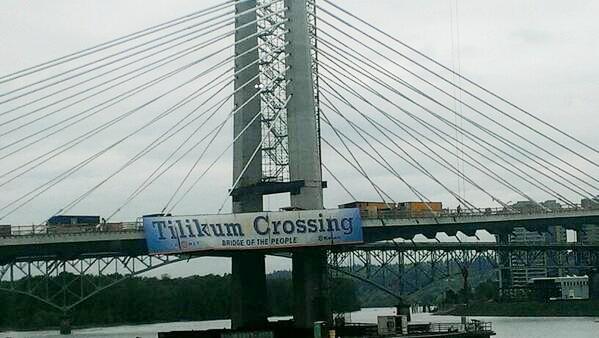 Portland’s new light rail transit bridge connecting Portland to Milwaukie across the Willamette River, will be called, the “Tilikum Crossing, Bridge of the People.”

Regional transportation authority, TriMet, announced the name Wednesday at a ceremony on the Eastside greenway near Oregon Museum of Science and Industry.

“Tillicum” is a word in Chinook jargon that means people, tribe and relatives. With the passage of time, it has also come to mean friendly people and friends. Chinookans are indigenous peoples and tribes who have lived near the Columbia and Willamette rivers for 14,000 years. However, Chinook jargon is not the language of any one tribe. The jargon was developed to help native peoples communicate across distinct languages and dialects, and was later used to communicate with explorers, fur traders and settlers.

The bridge will be the first in the United States to carry light rail and streetcar trains, buses, bikes and pedestrians, but no private vehicles.

The other three finalists were:

The bridge’s name was chosen by a committee of diverse regional leaders chaired by Chet Orloff, directore of the Oregon Historical Society and a 22-year member of the Oregon Geographic Names Board.

TriMet said the criteria for selecting the name included:

• Is it inspirational? If so, why?

• Does it reflect how bridge connects people? If so, how?

• Historical significance (if any)