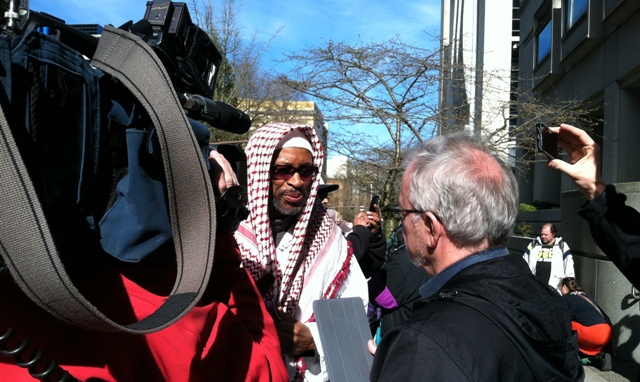 Housing activist Ibrahim Mubarak was arrested last night by Portland Police as he and a group of volunteers offered outreach services to about 100 houseless individuals under the Burnside Bridge.

Mubarak, a well-known community organizer who is a co-founder of housing projects Dignity Village and Right 2 Dream Too, and a KBOO Community Radio producer, was the only person arrested; he had been accompanied by about 20 outreach volunteers who regularly check in with campers under Portland-area bridges.

He was charged with trespassing and interfering with a police officer, apparently in the Mercy Corps Building and University of Oregon’s White Stag Building parking area.

Mubarak, who was arraigned Friday afternoon and given a court date of March 10, says that his religious and Constitutional rights were violated in the arrest and during the booking process, when officers in the Justice Center insisted on using his given name rather than his legal name and kept demanding he give them his birth name.

“I said my name has been legally changed for 20 years and they said well, we are going to call you what your mama named you, not what Ali Baba calls you,” Mubarak said.

Mubarak, a Muslim, confirmed that one of the Portland Police officers at the JusticeCenter used the term “Ali Baba” in referring to his name.

“Because I wouldn’t sign what my birth name was, they threw me in the hole for four hours with limited clothing on and the air conditioner turned up,” Mubarak said outside the Justice Center on Friday afternoon.

Activists say a dramatic increase in sweeps against houseless people has been triggered by a new project of the Multnomah County District Attorney and the Portland Police Bureau, called the Chronic Offender Pilot Project, or COPP.

No one was available for comment in Bureau of Housing Commissioner Amanda Fritz’s office, and a spokesman for Mayor Charlie Hales said he would get back with a comment later in the day.

A 9-minute Facebook video – which had been shared almost 50 times by Friday afternoon -- shows at least half a dozen yellow-clad security officers, as well as Portland Police approaching Mubarak in a parking lot under the bridge as he stood in front of the scores of houseless campers, with one security officer in adistinctive yellow jacket informing the crowd they are trespassing on private property.

Mubarak is seen arguing with a Portland Police officer who repeatedly demands his name, and as he refuses to give it, she then demands he get back on the sidewalk. He refuses and is held and cuffed by three officers.

The noise of a large crowd grows steadily throughout the recording; Mubarak said Friday that the large crowd – which appeared to include at least one child -- was trying to bed down for the night when the officers arrived.

The security officer is seen telling an unidentified female activist, “We are not pushing you out,” and stipulating that “if they’re on the sidewalk? We’re not going to bug them.”

The woman presses the security officer, and he stumbles slightly on a somewhat confused explanation, the gist of which is that the campers need to stay on the sidewalk and not step off it at all.

The woman then asks, “What if they’re mentally ill and they don’t get it?”

The officer says that is handled on a “case by case basis.”

A second unidentified woman asks, “What if they’re sandwiched between people in a wheelchair and they can’t get around?”

“That, unfortunately, is not our problem,” the security officer says, adding, “We know Erica pretty well,” then an unintelligible voice is heard off camera.

“Cause you’ve been down here every night, Erica,” the security officer calls out. “You’re the first person excluded out of here.

“That unfortunately is not our problem,” the officer continues, “That should be taken care of by anyone who stays on the sidewalk.”

The issue of a disabled woman in a wheelchair appears to have some bearing on this case, witnesses and Mubarak say.

They said the woman in the wheelchair had been cited and excluded the previous evening, and activists say she had to be carried back and forth in her wheelchair to avoid breaking the Clean and Safe rules on the parking lot.

“We were getting lots of calls from homeless people saying they can’t go behind them, that’s private property, and if they step off the curb, they’d get arrested or a citation,” Mubarak said.

“I want Portland to cry out against this unjust law they are imposing on homeless people,” Mubarak said.