SaulPaul Visits the Northwest to Deliver Inspirational Message to Youth 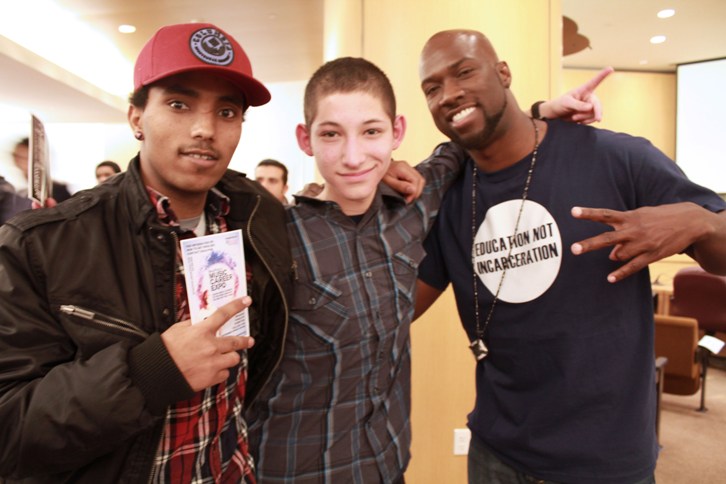 That was the message acoustic rap artist SaulPaul brought to youth in Portland last week.  Wearing a tee-shirt emblazoned with the words, Education Not Incarceration, he spoke to children and teens involved in the juvenile justice system at a special event in the Multnomah County boardroom, Feb. 5.

The next day he took the same message of hope and encouragement to youth in the Donald E. Long juvenile detention center.

SaulPaul said he took control of his life after committing a felony at age 16, and turned it around to graduate from college with a 4.0 GPA, and build a successful career as a musician, author and motivational speaker.  Making good choices can start today, he said.

“See, just because you make dumb decisions doesn’t mean you aren’t smart. It breaks my heart to see so many of you here because you made so many bad decisions. And everyone around you…they talk to you and treat you a certain way, and you started believing what they were telling you. And you don’t realize how great you are. You start living up to the level they set for you.

“You’ve got to catch that!  You act like you’re dumb—even though you’re not. So they start treating you like you’re dumb. And before you realize it, you start acting like they treat you.”

SaulPaul started out in the Houston ghetto, losing his mother at age three, and never knowing his father. Just about every male in his family and his environment went to prison, he said. It was expected. But he was here to show youth they can end the cycle of crime and incarceration.

Work with positive people like counselors and teachers to reach your goals, he said, and be yourself.

“Maybe you’re fresher and doper than everyone around.”

Children and teens crowded around SaulPaul after the presentation, getting their photos taken, sharing their dreams and asking him for advice and support. He promised to return to Portland later this year.

SaulPaul’s video game, Dream in 3D, his book of the same name, and his songs can be downloaded from his website, saulpaul.com/.

During his week in the Northwest, he met with staff at education nonprofit Self Enhancement Inc. and POIC alternative school. He also took a short trip to Seattle. He will definitely be coming back in September, he says, but hopes to visit in summer as well, and build long-lasting connections.

“There’s plenty of work to be done here,” he said.