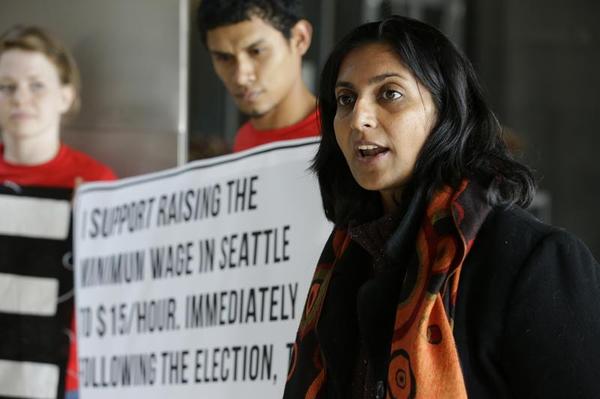 Because counting is still underway in Washington state’s mail-in voting system, the winner has not been officially named. But the Seattle P-I said Sawant’s current lead of 1,148, is now unbeatable.

The strong showing by Sawant, who has played a prominent role in Seattle’s Occupy Wall Street movement, has surprised many people.

Scott Cline, the city’s archivist, said research showed no Socialist candidate had won a citywide office in the past 100 years.

“This is new territory. There really isn’t any precedent,” said Stuart Elway, a longtime political pollster. “You think Seattle has a pretty liberal electorate, but you haven’t seen someone who calls themselves a socialist win.”

Sawant, 41, drew attention as part of local Occupy Wall Street protests that included taking over a downtown park and a junior college campus in late 2011. She then ran for legislative office in 2012, challenging the powerful speaker of the state House, a Democrat. She was easily defeated.

This year, she ran against Conlin, pushing a platform that appeared to resonate with the city. She backed efforts to raise the minimum wage to $15; called for rent control in the city where rental prices keep climbing; and supports a tax on millionaires to help fund a public transit system and other services.

“I think we have shown the strongest skeptics that the Socialist label is not a bad one for a grassroots campaign to succeed,” said Sawant, who is on leave from her job as an professor at Seattle Central Community College.

During her campaign, she condemned economic inequality, contending that some people aren’t benefiting from the city’s declining jobless rate, ongoing recovery from the recession, and downtown building boom.

“This is one of wealthiest cities in the wealthiest country in the world,” she said. “For people to struggle for basic needs is absurd.”

City Council races are technically non-partisan in Seattle. Sawant, however, made sure people knew she was running as a Socialist, a label that would ensure defeat in many areas of the country.

The last time a self-declared Socialist ran for office in Seattle was 1991, when Yolanda Alaniz emerged from the primary in second place but was easily defeated in the general election.

“There were certainly populist candidates,” said Cline, the city archivist. “I don’t think any of them you could remotely call Socialist. Certainly there has never been anybody who has run as strongly as Sawant has.”

Copyright 2013 The Associated Press. All rights reserved. This material may not be published, broadcast, rewritten or redistributed.