'The Last King of Scotland' Keeps Viewers on Edge 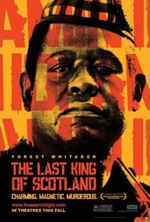 "The Last King of Scotland" is a powerful historical film based on the award-winning novel by journalist Giles Foden. It tells the story of infamous Ugandan dictator Idi Amin and how a Scottish doctor becomes his confidante during an unusual time in Uganda.
Directed by Kevin Macdonald, "The Last King of Scotland" follows Dr. Nicholas Garrigan (James McAvoy) who comes to Uganda in the early 1970s to work at a missionary clinic just as Amin (Forest Whitaker) takes control of the country in a military coup.
The two characters meet when Garrigan is rushed to help the injured Amin. Amin instantly takes a liking to Garrigan after learning that the young doctor is Scottish. Amin, who once served with the British Highland regiments, was familiar with Scottish customs and admired the culture – he even gave his son a Scottish name. The two became close and Amin makes Garrigan his personal doctor/advisor.
In the film, ruler Amin is viewed as an unstable character. One moment he is a kind gentle soul, and the next a raging, vicious bull. In some ways the two main male characters are similar. Garrigan initially came to Uganda to help the sick, but finds himself seducing the local women and enjoying the life Amin provides for him. Both men recognize power, and use it to their advantage. It is not until others begin to get hurt by his actions, that Garrigan realizes what he has become during his time in Uganda.
The Scotsman tries to pull away from the relationship he has with Amin, which is when he starts to see the real Amin. But Amin is greatly attached to the young doctor and Garrigan's realization may have come too late.
The cast seemed hand picked as everyone played their role with ease, including Kerry Washington, who played the youngest of Amin's three wives. Forest Whitaker, playing Amin, keeps you on edge, anticipating his next outburst.
This film shows how people from different walks of life can be two of a kind, and how a person can become so fascinated with life's luxuries and adoration that they hurt others. More than that, "The Last King of Scotland" is a perfect depiction of how one man's actions can decide another man's future.