A tale of two creatives: Cleo and Kayin Talton Davis 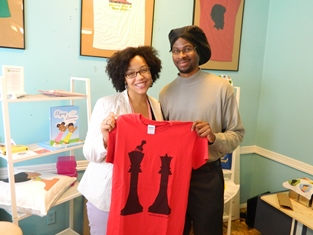 There is no shortage of angles when it comes to Soapbox Theory and Screw Loose Studio. Yes, the two businesses are in one of the last Black owned properties in their urban renewal area; they have been successful in Portland while doing mostly culturally specific designs and products; Cleo and Kayin Talton Davis, owners of Screw Loose Studio and Soapbox Theory, respectively, are an almost too good to be true husband-wife business team.

Any of those could be a hook for this article.
But the real story, the inescapable, winding thread, is that two creators built their businesses on their terms and when they share their stories, none of the aforementioned hooks are a surprise.

"I have always been a 'Let's try it' type of person," says Kayin. "I've always been the type to take things apart. Building a business, the components are different. I like the challenge." 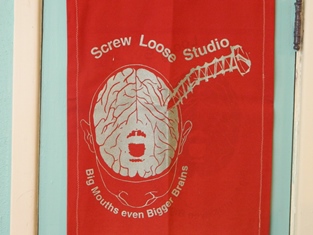 Long before they met, Kayin and Cleo had visions for their careers. They studied engineering and product design in school, spent time working in the field and eventually decided they needed to express their creativity.

You can find the still-evolving result inside a sky blue print shop on Williams Avenue. One side is the Screw Loose Studio workspace, equipped with multiple computers, a human sized printer and a wall full of design samples featuring everything from Malcolm X, to Run-DMC, to "Che Pac."

"A lot of times, when I was younger, and people would see my designs, they'd say, 'you have to have a screw loose to think of combining these elements like that,'" says Cleo. "It was actually a compliment, not an insult."

The other half of the shop is a retail space for Soapbox Theory. It includes everything from business cards with Black superheroes, to plates featuring smiling Black children of all shades, to "Brobots."

"One of my taglines is 'Bold. Creative. You,' says Kayin. "A lot of people ask me what Soapbox Theory means. Everyone, given the forum, has something to express. 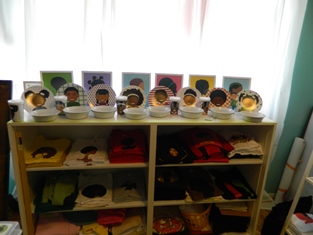 "There aren't a lot of products out there that represent Black, African American people with any kind of positivity behind it or even just, sometimes even neutral is negative. There's no positivity. There's no just, 'This is who I am. This is me,' without having to align with something else. Without having to align with sports, with a team, with music, with some other form of other identity."

When Cleo opened the shop in 2006, the couple had yet to meet. Fittingly, they registered their businesses only a month apart.

They were on different paths to the same destination, but the common thread was a larger vision and resistance to conventional ways of getting there.

Cleo grew up wanting to be an inventor. The closest thing he knew was his uncle, an architectural engineer at Arizona State University, who introduced him to t-shirt printing at a young age.

Despite being selected for the Talented and Gifted program in kindergarten, he was well behind his peers in math and reading.

When he got to Cleveland High School, he was placed in a math class for kids with learning disabilities. He forced himself to do a chapter's worth of homework every night to get on track for a college architecture program.

From there, he started carving out a few hours every day to lock himself in his room, put on slacks, a dress shirt and tie, and work on designs. By senior year, he only went to school on Fridays to turn in homework and spent the rest of his time downtown, hanging around Portland State University and going to art museums.
He graduated and went to University of Oregon for architecture. After two years he went down to California where he went back and forth between school and jobs in his field, studying product design along the way. 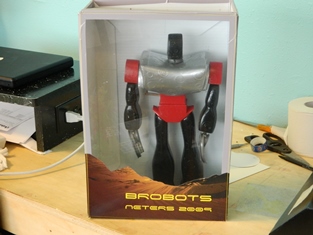 Around the time Cleo began college, Kayin discovered her love for engineering in middle school.

She took part in the Math Science Engineering Achievement program, graduated from Benson and went to the University of Pittsburgh for mechanical engineering.

There were only three Black students, out of 180 total, admitted into the engineering program at Pitt as freshmen. Kayin was one of two women and the only Black student in her 20 person class.

"It was very hard to be on any kind of team," she says. "One team I was on, they would schedule all the team meetings when I was in class. You would go to the professor and he would say, 'Go work it out with your team.' I had to prove myself a lot more than a lot of people had to."

Feeling the need to express her creativity, she started Soapbox Theory in 2001. It started as a hobby, where she made greeting cards for friends and family.

"I wanted people of color to relate to what I was drawing," says Kayin. "It's something you can identify with. 'I remember when we used to play like that or my cousin wears his hair like that.'

"It's not aggressive. It's empowering without specifically being Black power." 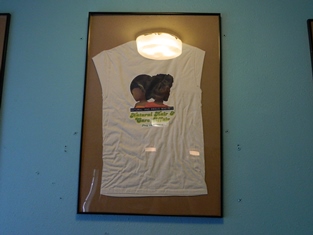 After two years, she came back to Portland and transferred to PSU, where she developed an interest in product design.

She graduated in 2005 but no available jobs fed her creative urges.

"There was one that I could've gotten but I didn't want to work as an engineer in a steel mill or a foundry. Some place just gray," says Kayin.

She decided to go back to school for industrial design and began attending the Art Institute of Portland.

As her business got more serious, she got restless.

"By second term, I said forget it. I know all of this," says Kayin. "I wasn't going to pay to learn what I'm already doing in business."

Meanwhile, Cleo was working in warehouses and as an electrician to build seed money for a printing business. He had moved back to Portland in 2003 and was using his free time to print in his basement and peddle shirts on the street, a craft he honed at 16.

"When you start printing, you're selling t-shirts to friends and family," he says. "You're looking for churches and festivals. Looking for civic and community groups. From there, whenever big events come into town, then you can sell on the streets. Anything hits the news, you take your message, put it on a t-shirt. Put it on the street." 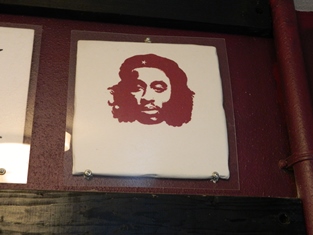 By 2006, he had the seed money, found a location on Williams Ave., and opened Screw Loose Studio.

Little did he know, he was about to meet his future wife and add a new dimension to his business.

The couple met that year and within six months, began working together.

"It helps out in many ways," says Cleo. "On the business side of things, you have an actual partner with creativity and vision also. It helps out a lot because you always have resources to pull from."

The partnership also allows Kayin to work mostly from home.

"When I was younger I wanted to have my own business so I could work from home and stay home with any children I had," she says.

Now, the team is building its brand not just locally, but across the country.

Kayin gets most of her business from larger cities with larger Black populations but her clients are as diverse as her products.

Unlike his wife, most of Cleo's business is done locally. He gets some customers from Washington and California too but most people hear about his shop through word of mouth.

During a talk with this interviewer, a customer from Grant High stopped by to tell Cleo that a shoe design made one of the school's coaches cry. He smiles, thinking about the moment.

"We've had a lot of cases where people come back or when they come in, they give us a big hug," he says. "That's what gives you a lot of business. You don't have to pound the pavement and advertise like crazy. You do good work, it speaks for itself and other people will speak for it."