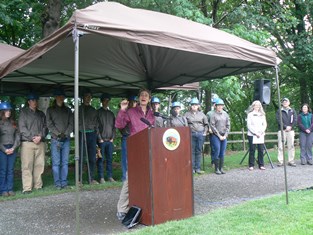 On May 23, U.S. Secretary of the Interior Sally Jewell announced $4.2 million in grants to support conservation employment and mentoring opportunities for more than 600 people ages 15-25.

She spoke at Oaks Bottom Wildlife Refuge and was introduced by Mayor Charlie Hales. Following her press conference, she participated in a public works project with area youth.

The grants support the Obama Administration's efforts to develop a 21st Century Conservation Service Corps. They include $1.27 million from the Bureau of Land Management and the Bureau of Reclamation.

The grants were awarded through a competitive process and will go to an array of projects in Alaska, Arizona, California, Colorado, Idaho, Montana, Nevada, New Mexico, Oregon and Utah.
Oregon won grants for three projects: one in Tillamook, one in the Grande Ronde basin, and one in the Portland metro area. The Portland Youth Corps project will employ 40 youth aged 16-19 to build trails and remove invasive species from natural areas, such as along the Sandy River. The project will run from June 17 for five weeks. Youth will be paid $1200. Apply at www.nwyouthcorps.org/  Click on Outdoor Oregon to find the program.

"We just found out about this funding so we are taking applications now," said Tom Helmer program director with Northwest Youth Corps. "We're looking for diversity and we have at least 15-20 open places in Portland and five more from East Portland."

Other youth jobs are slated for Washington and Clackamas counties.

About 60 youth will  be employed on the Tillamook project. They will include students from Nestucca High School, Tillamook Alternative High School and youth under supervision of the Oregon Youth Authority. Five student interns will work on the Grande Ronde project. An additional multi-state project will work with eight Latino youth from several states restoring habitat for shore birds.

According to the Department of Interior, the 21st Century Conservation Service Corps is a national collaborative effort to put America's youth and returning veterans to work protecting, restoring and enhancing America's outdoors. The Department plans to provide conservation employment to nearly 17,000 youth in national parks, wildlife refuges and on other public lands.

Jeff Trandahl, executive director and CEO of the National Fish and Wildlife Foundation, or NFWF, was among the other speakers at Oaks Bottom Wildlife Refuge. 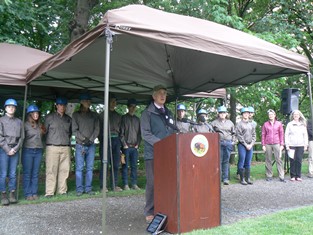 "By providing more than 600 conservation jobs, this partnership will help introduce young people from diverse backgrounds to meaningful employment opportunities, mentorships and the joy of the great outdoors," he said.

Creating opportunities for minority and at-risk youth was a consistent theme among speakers. However, minority youth and minorities in general were noticeably absent from the press conference.

The grants announced by Jewell will support 22 projects on public lands throughout the West, which are funded through the America's Great Outdoors: Developing the Next Generation of Conservationists initiative.