Video: Smile You're on Camera!

By Helen Silvis of The Skanner News
Published: 15 May 2013

Video surveillance cameras are just about everywhere. They watch us at the bank, in the mall on the street and on light rail. In theory they're supposed to prevent crime.  But civil liberties activists say they don't work. And what's worse, constant surveillance has put us on a slippery slope to complete loss of privacy.

It's true that law enforcement agencies have been able to ID some perpetrators through surveillance.  The 19-year-old suspect in the New Orleans Mothers' Day shootings was recognized with the help of surveillance video.  And the Boston bomb suspects were found thanks to video cameras mounted on businesses near the crime scene.

"I do not endorse actions that move Boston and our nation into a police state mentality, with surveillance cameras attached to every light pole in the city," Davis said. But he also maintained that camera surveillance is necessary.  Law enforcement agencies should, "deploy more assets – including technology, cameras, undercover officers and specialized units."

What we know is that increased surveillance of citizens is already happening. In Lansing, Mich., law enforcement installed cameras next to people's homes. After complaints, stoops and windows were blocked, but driveways, mailboxes and backyards have all been targeted.


ACLU Finds Blacks Twice as Likely to Be Targets of Surveillance
In a report called, 'Eyes in the Sky', the ACLU of Michigan argues that government camera surveillance is almost useless, but opens the door to all kinds of abuse—stalking, voyeurism and harassment. In the United Kingdom 4.2 million cameras are installed to monitor a population under 63 million. But studies show the cameras have neither reduced crime –not increased the rate of solving crimes.  Then there is the impact on your personal freedom. (Full report here: pdf file)

"Knowing that they are being watched, innocent residents may alter their lawful behavior," the ACLU report says. "The effect is to 'chill' innocuous speech, limit whom we are willing to associate with in our neighborhoods, and homogenize our citizenry."

No surprise either that the ACLU investigation found that Blacks are twice as likely as Whites to be watched.

"The disproportionate monitoring of people of color actually exacerbates the conditions that facilitate anger and resentment of law enforcement," the report says. "In a society where many African Americans already feel profiled, installing surveillance cameras in their communities to constantly monitor their behavior only serves to heighten their sense of powerlessness and to foster mistrust of government officials." 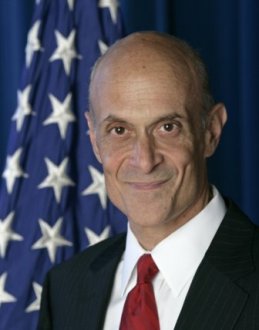 Former Homeland Security Director Michael Chertoff also has criticized the growth of video surveillance.
"Even those who might be willing to forgo some degree of privacy to enhance national security should be concerned about a corporate America that will have an unrestricted continuous video record of millions," Chertoff said in a column.
"What is to prevent a corporation from targeting a particular individual, using face recognition technology to assemble all uploaded videos in which he appears, and effectively constructing a surveillance record that can be used to analyze his life?"

Portland Has More than 1000 Street Cameras
Most cameras on Portland streets are attached to private businesses. The online camera sales company, videosurveillance.com, is trying to track the location of street cameras and publishing the information to its online community cam map.  According to the map, downtown Portland is home to more than 400 surveillance cameras, with many more installed across the city. The Lloyd center area alone has more than 100 cameras, watching stores , ATMs and streets.

Company representative Chad Gingrich said in an email that people can use the map to plan safer, monitored walking routes, or after a crime, to see if a camera captured the events.

A Mother Seeks Evidence to Clear her Son
Could surveillance video be used to clear the innocent?
That was Vicki Jackson's hope, during her desperate search for video of a theft. Why?  Jackson's learning disabled 15-year-old son was charged with stealing a cell phone, a crime she says he did not commit.  But a court-appointed public defender advised him to take a plea deal. And the teen agreed to plead no contest.
"He just wanted to come home," she says. "He didn't understand. I can't believe they arrested someone who did not commit the crime. He had nothing to do with it. I have no justice."

The clothes her son was wearing that day – a bright yellow hoodie -- did not match the suspect's description, she says. If she could find video of the bus stop, she could prove his innocence.  Jackson went from door to door looking for video of the bus stop at North Portland Library on Killingsworth Street. Several cameras were pointed at the street, including cameras on The Skanner News building, but none had a clear view of the crime scene.

Now, Jackson is discussing the case with an attorney. But without any witnesses or video, she knows it won't be easy to clear her son.

It's not the first time that surveillance video has been missing at a crucial moment. When 14-year-old Yashanee Vaughn disappeared after eating at Taco Bell, police checked the restaurant's surveillance camera –only to find it hadn't been working for many months.

And just last week, Malcolm Shabazz, grandson of Malcolm X, died after being savagely beaten at a bar in Mexico City. Two bartenders were arrested and others are under investigation. But video of the incident was missing. Why? Cameras watching the Plaza Garibaldi had been moved or turned around.


Police Use Video to Identify Suspects
Yet catching culprits through video has become routine. Portland police recently released a video, for example, that shows a theft going down in a Portland restaurant.  Using her walking cane, a woman snags a purse from under a neighboring table. She rifles through the contents, pockets her victim's credit cards and returns the purse to its former resting place.


Cameras Also Monitor Police
Police too have found themselves the unwilling stars of surveillance video. When Officer Christopher Humphreys, notorious for his role in the James Chasse case, used a beanbag gun at close range to subdue a 12-year-old girl, he was recorded.  You Tube hosts dozens of videos which claim to expose police misbehavior. And Portland attorney Greg Kafoury recently released video of an encounter between police and his client Jason Cox, which he plans to use as evidence in a lawsuit.


Powerful but Barely Regulated Technology
Does camera surveillance matter when smart phones are recording everything anyway? Google has just unveiled Google Glass, a wearable camera. Glass sends video to cloud storage where it can be kept indefinitely. But who owns your image? Who can buy and sell your data? And do you have any rights over it?

So far, government has done little to regulate data gathered this way. On the contrary, since Congress passed the Patriot Act after 9/11 our government has stepped up its surveillance of citizens. And not just with street-mounted video cams, but with wiretaps, intelligence gathering and drones. Government drones now monitor everything from traffic snarls and farming activities to cannabis grows and U.S. border crossings.

What's more, advances in technology have increased the power of the cameras.  Drone cameras can monitor whole cities, zooming out or into a location at will. Ordinary street cameras can record a 360 degree view, read the paper in your hand from 50 feet away, and recognize your face at a distance of 400 feet.


Every Move You Make; Every Breath You Take; They'll Be Watching You?
In Portland, transit agency TriMet, has installed surveillance cameras to monitor light rail and transit stops. And TriMet's new buses will come with six cameras that constantly record audio. ACLU staff attorney David Rocah argues that this kind of routine citizen surveillance is a gross violation of our 4th Amendment rights to privacy.
"You could argue that at some level it's trivial to talk about it in the context of only public transportation—how important is it really to have private conversations on buses?" he says in a story on the ACLU's website. "But what's at stake here is the principle of the government audio-surveilling our public spaces, and creating a situation where we can't have a confidential or private conversation unless we lock ourselves up in our houses. And that's inimical to the Fourth Amendment."