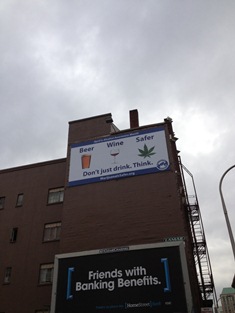 With Alcohol Awareness Month approaching, the Marijuana Policy Project decided to make a statement with a new billboard in downtown Portland. It featured pictures of a glass of beer, a glass of wine and a marijuana leaf accompanied by the words "Beer," "Wine," and "Safer," respectively.

"The facts are marijuana is objectively less harmful than alcohol," says Roy Kaufmann, the organization's Oregon Representative. "We need to think as a community about why we are continuing to push people towards consuming alcohol and punishing adults who want to make a safer, less harmful choice, consuming marijuana."

According to a KGW report, the billboard "tipped over" a couple hours after the press conference. Kaufmann believes it was intentionally cut or vandalized and hasn't announced when the sign will be replaced.

Earlier in the day, he emphasized that the billboard wasn't intended to encourage people to choose one or the other but to make them think about the circumstances. Kaufmann stressed that marijuana use in comparison to alcohol drinking is less harmful to the individual, the community, public costs and public safety.

He also rejected claims that the legalization of marijuana would increase intoxicated driving.

"I don't encourage anyone to drive impaired under anything," says Kaufmann. "Whether that's prescription pills, whether that's sleep deprivation, whether that's angry, road rage, it's clearly a serious issue or whether you're consuming a substance. You shouldn't be driving impaired at all. But when police make claims that somehow all of the sudden if marijuana is legalized and regulated that there is going to be more people driving stoned, it doesn't recognize the reality that marijuana is already a largely consumed substance in our community."

Marijuana policy has a particular importance to the Black community, says Kaufmann. He notes that the war on drugs has resulted in the disproportionate incarceration of people of color, specifically Blacks and Latinos. Recently, the NAACP passed a resolution opposing the drug war. The Northwest Chapter of the NAACP endorsed Measure 80, which would've legalized, regulated and taxed marijuana, during Oregon's last election.

"There is no way to separate the conversation of reforming broken marijuana policy and broken drug laws with the issue of racial disparity and racial equity," says Kaufmann.

He does, however, acknowledge that there are serious concerns about substance abuse in the Black community, which can make the conversation about marijuana policy difficult.

"You've seen a real struggle with this conversation because does legalization

encourage people to consume marijuana where communities of color are trying to make sure their youth aren't falling into bad behaviors and bad patterns?" asks Kaufmann. "People of color are most susceptible to being arrested, persecuted, prosecuted, incarcerated and we know what that does to communities. When you take members of a family out of their setting, out of their home, you break apart the family. You put somebody in prison, you release them from prison and they can't support their family and they're in many cases forced to return to crime, usually doing worse things than they were doing in the first place because they now have a criminal record."

The new billboard has drawn controversy because it's located across the street from the De Paul Drug and Alcohol Treatment Center. Kaufmann says the placement was coincidence. While he understands why people at the treatment center are upset, he encourages the treatment experts to become a part of the conversation. They should be the first ones to stand up and want to educate people about the relative harms of substances, he says.

"I think that the issue of abuse versus use is a real one and a serious one for all substances and for the small percentage of people that get addicted to substances, that's an even more serious issue," he says. "I think one of the challenges of talking about marijuana policy, talking about the fact that marijuana is safer than alcohol, less harmful than alcohol is to remove a lot of the stigma so we can say, 'Yes, somebody can consume marijuana for years and years and they will be an upstanding member of their society and an upstanding member of their community.'"

For more information on MPP's new initiative, go to MarijuanaIsSafer.org.