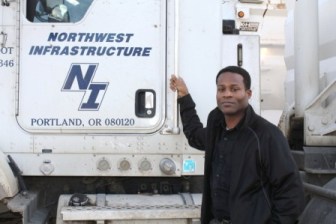 Michael Martin built his company, Northwest Infrastructure, from the ground up.  The son of a truck driver from San Bernadino, Calif., Martin didn't inherit anything except grit, self discipline and intelligence.  Ambition?  He supplied that himself.

"I knew I had to do it myself," he says. "I was thinking I have to create the opportunity myself because no-one's going to give it to me."

After graduating from high school at 17, Martin found work as a laborer and came to Oregon to work for a company that remodeled homes.  At work, he saw heavy equipment operators digging up huge mounds of earth to make way for construction. He liked what he saw so he took a heavy equipment course at West Coast Training.

Next, Martin went after his general contractor's license. He was just 22 years old when he launched his construction company. Today, he can smile when he remembers how he financed his business – but he wouldn't recommend it to anyone.
"Everything was on a credit card," he says. "At age 21-22 you don't know up from down. But I just stuck with it and just figured: if I can stick with it, I can do it."

Looking out for jobs that included heavy equipment excavating, Martin gained experience and built his company's portfolio. Contractors have to pay out a lot of money on equipment, materials and wages, before and during jobs. And they often have to wait for their money.

He had to learn to walk the difficult line of construction financing.  Bid too much – a danger for small companies that can't buy their materials at deep discounts – and you lose the job. Bid too little and you're soon out of business with a ruined reputation.

So, after each job, Martin would pay off the credit cards, take a chunk of his profit and use it to buy  trucks and heavy equipment.
"It's up and down," he says. "It's the same cycle over and over and over again. For years it was like that."

But Martin stuck with it. Today, 20 years later, he runs a successful construction company doing something close to $7 million a year in contracts. He owns 13 trucks, several pieces of heavy equipment, and employs 20 people, based at Northwest Infrastructure's 8,400 square foot shop in Sellwood. 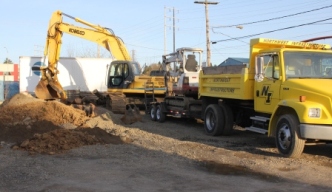 This year his company is moving 250,000 yards of dirt to make way for a new reservoir at Kelly Butte. The firm is also working on Portland Community College's Rock Creek expansion project, as well as a host of small projects.
Martin has also found a better way to finance his business.  For the last couple of years, he's been working with Albina Opportunities Corp., a business loan nonprofit, that works with established minority and women-owned businesses to help them grow.

Albina Opportunities Corp. isn't for start-ups. It's for businesses with a track record of success that need help to move to the next level. It specializes in loans and technical assistance for businesses owned by women, minorities, immigrants or operating in low- and moderate – income areas.  Northwest Infrastructure qualified.

"We went to Albina Opportunities Corporation to grow," Martin says. "We needed to take that last step. And you need a bank to back you. They gave me a credit line and increased the credit line as we got busier.
"Once they find out what your need is, they not only provide you with the tools to be successful, but they provide you with teaching on an abundance of business topics."

Business advisors also help entrepreneurs like Martin step back and look at the big picture so they can make smart expansion plans.
"The advisors can help you analyze your business and show you what's going to help you grow: you identify the next stages and the progressions that need to be made to be able to move to the next level."

People of color have faced steep barriers in the construction industry. Martin is a member of the National Association of Minority Contractors which has worked for decades to expose fake statistics, dirty tricks and the failure of government agencies to include minorities in contracting and employment opportunities. Thankfully things are changing in Oregon, he says.
Hard goals are what make the (prime) contractors work with minority contractors," he says. "If that minimum percent requirement wasn't there, they wouldn't reach out to small and minority contractors."

Terry Brandt, founding executive director of the nonprofit, says he and his staff hope to nurture more African American entrepreneurs so they can become successful on the same scale as Martin.
"That's what we are here to do," he says.

A father of seven children aged from 7 to 18, Martin says he hopes to be able to pass down the business to his family. His eldest son, graduating this year from Heritage High School, will start out as a pipe layer, he says. His eldest daughter, a sophomore, works in the office over the summer.
"They love the business," he says.

But Martin is also committed to giving inner –city youth opportunities to learn construction trades at Northwest Infrastructure.
"They need an opportunity and you can make a good living in this business," he says.  "I know how important it is that someone will give them a chance to learn a trade, where they will be treated fairly, not just there to meet a quota. They need someone who will believe in them, so they will believe in themselves.
"But it's no cakewalk. You need to show up on time. You need to dress right. You need to be respectful. Or you can lose your job, because that's life. You have to teach them the way it really is."