By Helen Silvis of The Skanner News
Published: 20 February 2013

Downtown restaurant Portland Prime will hold the second annual "Salute to African American Leaders in Portland"  starting at 6:30 p.m. next Monday, Feb. 25. The dinner will recognize 12 African Americans who have made a difference in the Portland community.

Actress Robin Givens, and television anchor Brenda Braxton will co-host the awards ceremony in the main dining room . Students from the Self Enhancement Inc. choir and jazz legend Mel Brown will perform.  Each of the honorees has achieved in a different area of life, from business, law and religion to education, sports and entertainment.  Portland Prime is located at 121 SW 3rd Ave. For more information or to buy tickets ($65) contact Portland Prime, 503-223-6200 or email:  salesportlandprime@gmail.com

The awards will go to:

Business: Howard White, the former basketball player who became NIKE  vice president for the Jordan brand and created the "Believe to Achieve" youth program.  White's essay for the public radio show "This I believe," explains his philosophy of life: "I believe that every person deserves to feel someone acknowledge their presence, no matter how humble they may be or even how important."

Religion: Pastor T. Allen Bethel is the senior pastor at Maranatha Church.  Pastor Bethel has led community efforts on police and justice at the Albina Ministerial Alliance. He has championed blood drives, raised awareness about health issues, and has served on the boards of Warner Pacific College,  TriMet, Oregon League of Minority Voters, and the Oregon Trail Chapter of the Red Cross, to name a few.

Sports: Longtime wrestling coach Roy Pittman has mentored countless young athletes, even sending some to the Olympics. He founded and developed the Peninsula Wrestling Program where he doesn't teach only wrestling, but also sportsmanship, good manners and attitudes for success.

Law: Judge Ancer Haggerty is a federal judge who serves on the United States District Court for the District of Oregon. The first African American to become a federal judge in Oregon, Haggerty serves as a role model and inspiration to aspiring lawyers. The federal bar association created a civil rights essay competition in his name.

Child Development: Ron Herndon is the chair of the National Head Start Association, as well as of Albina Head Start. His educational activism has worked to reduce barriers that hold back Black students. Herndon created a watershed moment in 1982, when he stood on a chair at a school board meeting, challenging the board's decision to close Harriet Tubman school and pushing for action to close the achievement gap. An early champion of early childhood education, Herndon was ahead of the curve.

Community Activism: Joyce Harris is an educator and civil rights champion. As director of the equity program at Education Northwest, Harris promotes culturally competent teaching. Active in many community-led initiatives, Harris has been a community leader and activist in civil rights efforts to improve policing, education, employment and healthcare.

Leadership: Paul and Geneva Knauls own Geneva's Shear Perfection, the iconic North Portland hair salon. The two have been key figures on Portland's social scene since the 1960s, when Paul Knauls created the Cotton Club, which attracted nationally known musicians, singers and celebrities to Portland. Paul Knauls is known as the Honorary Mayor of North Portland.

Education: Tony Hopson Sr. founded Self Enhancement Inc. to provide Portland's most disadvantaged students with a lifeline to success. Pioneering a model of education that focuses on pride in self and community, along with hard work and focused achievement, Hopson makes sure students have the support and resources they need to learn and succeed in school.

Journalism: Chuck Washington, who passed away last December at just 60 years old, will be honored posthumously for his role as Publisher of The Portland Observer. Washington led the media business from 1996, showcasing the struggles and triumphs  of culturally diverse families and communities in Portland. 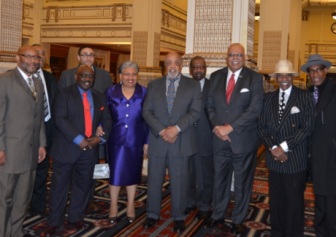