This just-in Press Release from the State Treasurers office: 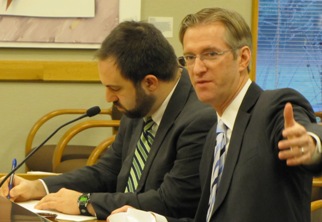 The Treasurer told members of the House Higher Education Committee that the Opportunity Initiative will help Oregonians be better prepared to create and fill new jobs, while also helping to reduce the heavy burden of student debt.

The committee opened the first legislative hearings on the plan, which was drafted by the Treasurer with the assistance of a coalition that includes educators, business representatives, lawmakers and students.

The Opportunity Initiative will create a Constitutionally- dedicated permanent fund that will be invested to finance student assistance.

"We have worked hard in Oregon to create and attract the jobs of tomorrow, and the Opportunity Initiative will help ensure we have the workforce for those jobs," Wheeler said.

The hearing comes on the heels of roundtable meetings in Eugene and Bend, where the Treasurer met with students, business leaders, legislators, university and community college presidents, and financial aid counselors to discuss the challenges for students – and also how a rising debt load threatens to erode the quality of Oregon's skilled labor force. Administrators said a stable and permanent fund would be a competitive advantage for Oregon.

"The Oregon Opportunity Initiative is a great idea, one that will provide reliable and stable financial support for Oregon students to participate fully in higher education," said University of Oregon President Michael Gottfredson.

Rep. Michael Dembrow, D-Portland, the chairman of the House Higher Education Committee, said he wanted to open hearings on the Opportunity Initiative in the first week of the session to signal the high importance of the idea.

The Treasurer is inviting students, business leaders and educators to the Capitol on March 7 for "Opportunity Day," which will coincide with hearings on the proposal in the Senate Committee on Education and Workforce Development. Attendees will be invited to discuss the blueprint with elected leaders including the Treasurer and legislators.

Oregon's future depends on maintaining a skilled workforce. The Opportunity Initiative will create a new permanent fund to augment financial assistance for Oregon students at universities, community colleges and vocational training programs. The fund would be created by tapping part of the state's available debt capacity, while remaining within prudent bonding limits – which will help ensure Oregon's credit rating will remain strong.

The cost to students of a college education in Oregon is rising rapidly. From the 2004-05 to 2011-12 academic years, the average Oregon university tuition and fees rose by 50 percent, while per-capita income in Oregon increased by 20 percent in the same period. That means tuition climbed two-and-a-half times faster than per capita income in that six-year period.

At the same time, public support of higher education and assistance has been waning. Oregon now ranks as 45th among states for per-capita support of education assistance, according to the National Association of State Student Grant and Aid Programs.

The Opportunity Initiative has been introduced for the 2013 Legislative session as Senate Bill 11 and two identical ballot referrals, Senate Joint Resolution 1 and House Joint Resolution 6. Only one of those referrals is necessary.