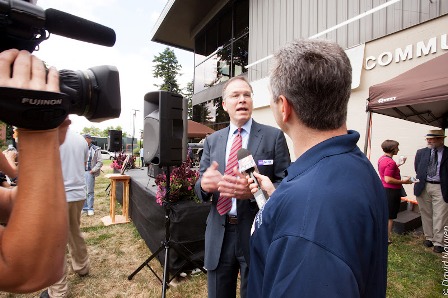 The Portland Parks & Recreation E205 Initiative to build up East Portland parks is officially a wrap after a year and a half of improvements to a dozen play areas and greenspaces.

Now the bureau is getting ready to visualize its next 10 years, including exploring the possibility of a new bond measure for the November ballot.

The Skanner News spoke with Portland Parks Commissioner Nick Fish about the E205 Initiative, the budget crunch -- and Sam Sachs and Asa Arden, the Portland Parks rangers who helped catch a rapist.

The Skanner News: Why are parks in East Portland such a big deal? Talk about E205 and what you all accomplished there.
Commissioner Fish: This is what's so interesting. Let me back up a bit and lay out some context. If I said to you where has the city spent the most capital dollars in the last 20 years, what part of the city? The one place you would probably not answer is East Portland. Because there's a general perception that East Portland has not received its fair share.

But interestingly, if you just track capital spending, it has more dollars have been spent by the city in East Portland than any other geographic area of the city over the past 20 years -- in the Parks Bureau. And the fruits of that are, we've acquired a lot of land through prior bond measures, using systems development charges, and other resources. But the challenge is we have not had the funds to develop the dirt. So there are neighborhoods throughout east Portland that have a park that has been acquired but it has not been developed.

E205 was born from that dilemma. Forty percent of our families with children live East of I-205, increasingly we're seeing a diverse population dealing with poverty and other challenges. We have a couple of school districts that are struggling. What we said was long term we have to develop a number of those parks and fulfill a promise we made to the families of East Portland.

We made our report to council and what we said was that this is a building block. We have honored our commitment to do these small scale improvements. Now we have to move forward with the next bond measure and allocate funds for the bond measure to actually build out parks that East Portland families deserve.

TSN: Did you say "new bond measure?"
CF: Historically roughly every 10 years the city has gone out to replenish a bond. Our last bond ends next year so it's already embedded in your rates. Gearing up to go to the voters this November to ask for a renewal of the bond -- that's my plan. Obviously there are a few steps I need to go through. Mayor Hales is fully supportive of our aspiration and if we're successful in renewing the bond we'll have money to improve some of our children's play areas, make some of our buildings seismically stronger, do some important work in Forest Park, upgrade some of our existing facilities and build out new parks in East Portland.

And so as part of a bond addressing East Portland equity, I actually don't think equity is the right word. I think the right word is justice. When you have 40 percent of your families with children in one geographic part of the city and they are underserved by Parks, I think justice requires that we invest in the kinds of parks and amenities that the rest of the city enjoys.

In any bond measure that I take to the voters there will be funds for new parks for East Portland.

TSN: We're learning that Mayor Hales actually supports a lot of stuff but he's still going to turn around and cut funding for them. How are you going to argue to voters and your fellow commissioners to justify the significance of the investment?
CF: The budget cycle is going to be tough.  But the E205 funding from Council came even while we were feeling the economic downturn City-wide and is a testament to City leaders' priorities and commitment to equal justice.

We are in about a $25 million hole – none of it is related to the economy. That's one of the big challenges. Ten million dollars of our hole is a result of compression caused by creation of a library district. Voters decided to put libraries in a preferred position but it impacts other local government. It costs us $10 million. Five million dollars is the current price tag with the DOJ settlement. So 60 percent of our hole is caused by two events that were not foreseeable a year ago.

I don't believe we'll resolve our problems through cuts alone. Anymore than I think Congress is going to go to sequestration. Across the board cuts are irresponsible.

We're going to have to look at a variety of approaches. One is better coordination with the county. Two is shared sacrifice with our labor partners. Three is new revenues. Four is targeted cuts. Five is bridge financing for some of the things we care about.

But here's what I refuse to do: At a time when there are people in our community do not enjoy basic services like a neighborhood park, I'm not going to let a budget crisis to continually be the excuse for depriving them of the services they deserve. In my view, a neighborhood park in East Portland is just as important as paving streets and providing other services. And my job as a leader is to fight for East Portland.

Last year we won the gold medal for the best park system in America -- 150 years in the making and we achieved the gold medal because Portlanders have invested in building this great system over a 150 year period.

Going forward I am not going to allow this to become a bronze medal system. And that means continuing investment, expanding services to underserved parts of our community, and leveraging public resources as effectively as we did on E 205.

TSN: Can you comment on Park Rangers Sam Sachs and Asa Arden, who helped the police catch an alleged rapist in Washington Park who was convicted this week.
CF: I'm a big fan of Sam and Asa, and I think the Rangers have made a difference. You remember how much flack I took for that. I was targeted in the editorial pages, targeted by the Portland Business Alliance. Everyone was jumping on our backs saying don't expand the Ranger program at the expense of the security program the PBA ran downtown.

And I said our Rangers are problem solvers, they're our eyes and ears in the parks, they perform a different mission. I think we can actually have safer parks if we do it our way, and I think it's been born out.

And Sam is a shining example of why the Ranger program is succeeding. I get emails all the time from people saying they now have a relationship with their local ranger, and that they're helping to solve problems, And that was what we hoped for.