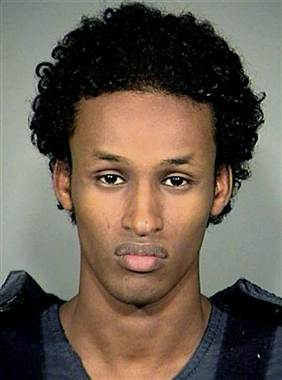 A naturalized U.S. citizen from Somalia was convicted Thursday of plotting -- unsuccessfully -- to bomb a Christmas tree-lighting ceremony in Portland, Oregon, more than two years ago.

A federal jury in Oregon capped a 14-day trial by finding Mohamed Osman Mohamud, 21, guilty of one count of attempting to use a weapon of mass destruction, namely explosives.

"When an individual concocts a plan to commit mass violence -- and is determined to follow through -- law enforcement has an obligation to take action to protect the public," said Lisa Monaco, a U.S. assistant attorney general.

Mohamud was a 19-year-old Oregon State University student when he was arrested on November 26, 2010, for trying to blow up what he believed to be an explosives-laden van parked near a holiday event in Pioneer Courthouse Square, authorities said.

The bomb -- which Mohamud described that day as "beautiful," according to his arrest affidavit -- was actually fake, thanks to federal agents involved in the extensive undercover operation.

Born in Mogadishu in 1991, Mohamud moved to the United States and became a naturalized U.S. citizen, settling in the northeastern Oregon city of Corvallis. Years before he enrolled at Oregon State University, he'd started thinking -- at age 15, according to the U.S. Justice Department -- of taking part in a violent jihad.

In February 2009, he began exchanging the first of about 150 emails with Samir Khan, a now deceased al Qaeda member who published two online publications tied to the terrorist group, Jihad Recollections and Inspire. According to the Justice Department, Mohamud wrote several articles under assumed names for the former publication.

The Oregon resident began communicating electronically in August 2009 with another accused terrorist, Amro Al-Ali. (Al-Ali is now being held in his native Saudi Arabia on terrorist charges, federal authorities said.)

The two discussed Mohamud's possible travel first to Yemen, then to Pakistan's northwest frontier province, for terrorist training. "Yes that would be wonderful, just tell me what I need to do," Mohamud wrote back in December 2009, the affidavit stated.

That trip never happened, despite Mohamud's efforts to contact intermediaries to facilitate it. But he was reached in summer 2010 by a man who, unbeknownst to him, was an undercover FBI employee.

"Mohamud said that he wanted to become 'operational,'" the affidavit said in describing Mohamud and the federal agents' conversations.

The FBI probe moved to another level, including several discussions and trips involving Mohamud and undercover agents. On November 4, 2010, on the way back from a trial run to a remote location to detonate a bomb, he was asked what he hoped would happen to those attending the Portland holiday ceremony, a family event that includes men, women and children.

"I want whoever is attending that event to leave ... either dead or injured," Mohamud said, the affidavit states.

Having already canvassed to the area to find a spot to inflict the most casualties, Mohamud got what he believed to be a live bomb from the undercover agents. But the device was inert, and after his second attempt to detonate it, Mohamud was taken into custody.

"This trial provided a rare glimpse into the techniques al Qaeda employs to radicalize home-grown extremists," said Amanda Marshall, U.S. Attorney for Oregon. "With the verdict today, the jury has held this defendant accountable."