TriMet has found itself on the third rail of Portland politics lately, lost in the media buzz over its labor union negotiations and an outcry over driver safety linked to staffing problems.

Less remarked upon has been the success of their Disadvantaged Business Enterprise program in generating jobs through light rail construction.

The National Organization of Minority Contractors of Oregon last month named TriMet Agency of the Year by an "overwhelming" margin of its members.

"TriMet has a strong and committed DBE program, which has steadily grown with each rail project over the past decade," says NAMC-O board member Faye Burch.

(Stacy and Witbeck construction company, the TriMet's prime contractor on the Portland-Milwaukie Light Rail Transit Project, was also honored by the group).

Helmed since 2011 by TriMet Director of Diversity and Transit Equity Johnell Bell, the agency reports that nearly 4,500 jobs have been created so far through the 7.3-mile project extending from downtown Portland to Clackamas County.

By the time it opens in 2015, TriMet says they're on track to create 14,500 jobs in total. And for the first time, the agency says, one-third of the contracts have been awarded to firms owned by people of color and women.

TriMet says nearly 24 percent of the construction jobs so far have gone to people of color and about 16 percent to apprentices; the project is only 30 percent complete and agency officials say $76 million in DBE contracts have been generated to date

"With this influx of new labor, the DBE program is not only providing jobs now, but creating the workforce of the future," said spokeswoman Mary Fetsch. 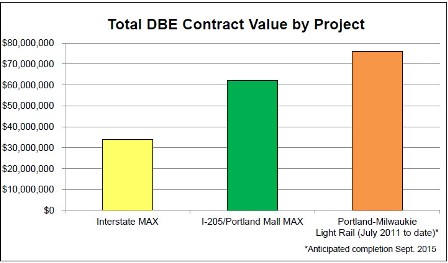 These 102 Disadvantaged Business Enterprise (DBE) firms have reached a new record of contracting for any regional project.

"A core tenet of TriMet's Transit Equity effort is creating opportunities in low-income and communities of color. These jobs are making a real difference in our community, and are helping to reduce transit inequities through economic empowerment," Bell says. "DBE firms are growing and expanding into new areas because we're providing the opportunity to take on new work."

The goal of TriMet's DBE program -- like others in the field -- is to promote a level playing field, remove barriers and increase contracting opportunities for people of color and women in both the professional and construction fields.

TriMet's main innovation started out simple: Find ways to hire more disadvantaged companies by breaking the contracts up into smaller jobs; over time, as more DBE companies build their capacity and grow, those companies should be in a better position to become prime contractors that can land bigger jobs.

"Breaking the contracts up into smaller contracts is just part of it; I think the greater vision is you find ways to eliminate barriers," Fetsch says.

"It could be smaller contracts. It could be that the emerging business needs help with insurance and bonding – just some technical assistance.

So it's in every way possible, how you eliminate barriers to help DBE firms succeed in the field."

"We're proud to have expanded our outreach to the DBE community and have reached a record high participation rate," said Dan Blocher, executive director of TriMet Capital Projects Division. "And we will continue to hire more DBE firms as construction continues."

TriMet created its DBE program in 2000 as it planned the Interstate MAX Yellow Line construction. The agency held a series of public meetings which were packed with North Portland residents demanding, in part, job opportunities for disadvantaged communities.

Today, other cities hold up TriMet as a model – even as other transportation jurisdictions in Oregon have endured criticism and even federal scrutiny of their DBE operations.

Edmund Tawiah's engineering and surveying firm, TCC & Associates, Inc., has garnered close to $275,000 in contracts on the light rail project.

"Previously, most of our work was with new housing, either subdivisions or infill," he said. "When all of that came to a stop at the height of the recession, the Portland-Milwaukie light rail project kept us in business."

With approximately $100,000 in Portland-Milwaukie Light Rail Transit Project contracts so far, Azuri Construction has supplied and installed fencing at project sites along the 7.3-mile alignment.

"Having the DBE certification allows me to compete," firm owner Jose Figueroa says.