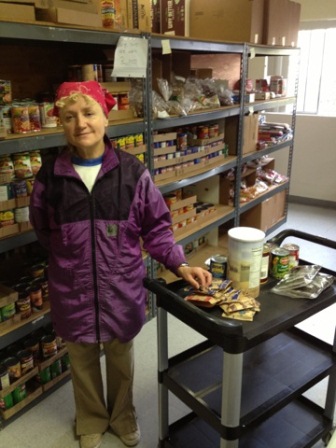 While policymakers in Washington, D.C. argue over the size of cuts to emergency food assistance, a new survey from the Oregon Food Bank says most families getting help are still going hungry.  Supplemental Nutrition Assistance Program (SNAP)  benefits –formerly called food stamps -- don't even last the entire month, for most families.

"It's incumbent upon every Oregonian, every member of Clark County, every American citizen to stand up and say no, we will not stand for people to be hungry, for our kids to be hungry," says Janeen Wadsworth, interim CEO of the Oregon Food Bank. "Our legislators, our policymakers, our leaders need to stand for those people as well."

This week, City Commissioner Dan Saltzman announced plans to make sure Portland's hungry children and teens are getting fed.

"The Portland Children's Levy will be asking voters to do more," Saltzman said at Wednesday's Portland City Council meeting. "We've got to do more to get food into the hands of hungry children."

That's not news to anyone working with youth or families, as The Skanner News reported in July after hearing from youth workers and teens at PAL's Eastside Youth Center.  About 34 percent of emergency food box meals go to children under 17.

The findings suggest that many people have been hit hard by the "perfect storm" of inadequate SNAP benefits, long-term unemployment, persistent underemployment and the high cost of food, gas, utilities and rent.

percent in 2011. And 61 percent of the people in the Food Bank survey reported a drop in monthly income during the past two years.

25 percent said their SNAP benefits lasted for fewer than 14 days.

In addition to inadequate SNAP benefits, the employment picture has been a huge contributing factor to hunger in Oregon.

"We've seen a lot more families with children come," says Captain Dwayne Patterson of the Salvation Army's Moore Street Corps and Community Center. "They're working families. It's hard to get by when you have one person with a job in the household. And sometimes that job is part-time."

"Because hunger is an income issue, it's very sensitive to the ongoing recession we have," says Wadsworth. "When people tap out their savings and their resources, and in many cases have lost their homes, they don't bounce back very quickly."

Patterson says the Salvation Army has had to make a number of changes to address the growing numbers of hungry families. First up is a new feeding program for families with kids that will run Tuesday through Friday. The aim is to give families one more meal they won't have to use SNAP for. The Salvation Army usually runs a food program in the summertime, and on a limited basis during the school year. From now on it will be a regular event.

Also, the Salvation Army has switched to a shopping style to distribute food. Before, families would receive emergency food boxes. Now, they can individually choose the food that's right for them, says Patterson.

"That's a sobering statistic that should make us all pause," she says.

Unfortunately, Wadsworth says, the solutions being proposed in Washington, D.C. will make the situation worse.

For more information on the Hunger Factors Assessment , go to the Oregon Food Bank's website.