By Helen Silvis of The Skanner News
Published: 12 September 2012 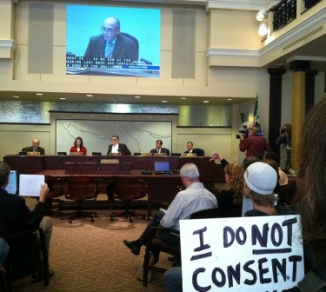 Portland City Council has voted to add fluoride to the city's water supply. Sponsored by Commissioners Randy Leonard and Nick Fish, the measure was passed in a unanimous 5-0 vote
At least eight protesters opposing fluoridation were ejected from the council meeting after shouting at commissioners as they were explaining their votes.
"You're out of here. Goodbye,"  Mayor Adams said, time after time during the session.
Commissioners said the issue has caused more dissension than almost any other previous vote.
"I've had 33,000 comments, by far the most I've received on any issue," said Commissioner Fritz. "And I know whichever way I vote today many, many Portlanders will be unhappy with me."
A coalition of health organizations and minority advocates –Everyone Deserves Healthy Teeth— worked to persuade Mayor Adams and Commissioners Leonard and Fish. Advocates say fluoridation is a safe way to prevent tooth decay for everyone, but will particularly benefit low-income and minority children who have far higher rates of rampant tooth decay.

Opponents say fluoride may not be safe at any level, and should not be added to our water without giving voters a choice. Hundreds of opponents turned out to last council meeting, Sept. 6, to testify against the plan.
A nurse and the daughter of a dental hygienist, Fritz said she had decided to vote in favor of fluoridation because the preponderance of the scientific evidence supports fluoridation, and because so many organizations from communities of color had requested it.
"I can't one day vote for a greater voice for communities of color and then turn around and ignore what they say," she said. "The preponderance of evidence concludes that fluoride is helpful and not harmful in the quantity recommended."
Yet Fritz acknowledged that both sides of the debate have valid points to make. And she said more must be done to level the playing field for poor children, many of them children of color, who have twice the average rates of tooth decay.
"Fluoride isn't a cure-all," she said. "We can add fluoride to our water and we will still have a problem with oral hygiene.
"We need a public health campaign to encourage parents to sign kids up for the healthy kids program, where they will have access to twice-annual dental check-ups."
Fritz said she was unhappy that so many in the community felt left out of the debate because advocates had conducted discussions behind closed doors.
"Regardless of the merits of adding fluoride we have lost public trust on this matter," she said. "Voters have said 'No' to Fluoride three times. I'm disappointed that the debate on the merits of the proposal has been overshadowed by the process."
Fritz said she believes fluoridation will eventually be referred to voters. Opponents have pledged to launch a statewide initiative campaign to ban fluoridation. They'll have two years to collect 29,786 signatures, which must be handed in four months before a vote, which could come in either May or November 2014.
The Sept. 12 decision approved adding 0.4 parts per million of fluoride to the city's water supply, with the goal of starting fluoridation in 2014.  The Centers for Disease Control recommends adding 0.7 parts per million fluoride to water supplies, saying at this level fluoride is proven to be safe.
"Hopefully children born after we take this action won't suffer the effects of a lack of oral hygiene," said Randy Leonard, who sponsored the measure and leads Portland's Water bureau.
Commissioner Nick Fish said he was convinced that adding fluoride will help reduce tooth decay in the Portland-metro region.
"Fluoride is safe: Today over 200 million Americans drink fluoridated water," he said. And he said adding fluoride will cost taxpayers just $6 each to build a fluoridation plant and 64 cents a year to run it.
"For this modest investment we can prevent tooth decay and save millions of dollars in dental bills. Most of all it well benefit all children regardless of income," he said.
"I'm proud to vote 'Aye.'"
Mayor Sam Adams said he has listened to both sides and researched almost every claim made, in order to reach his decision to vote for fluoridation.
"The convincing claims are on the fluoridation side," he said. "I have researched almost every major claim and …Portlanders, I can assure you that the science is behind fluoridation as it is proposed here today. The science is very convincing."
Commissioner Saltzman said in a statement, that his experience leading the Children's Investment Fund had influenced his vote. Children don't have the power to make sure adults take care of their dental needs, he said. Children in foster care often lack consistent dental care.
"The dental health of a child during their formative years will affect him for his entire life," he said. "It is extremely hard to concentrate in school when your mouth hurts all the time. Later in life, the self-consciousness that results from poor dental care can become a major barrier to finding a job.
The single most effective, safest, and affordable way to extend life-long dental health to our youngest Portlanders is to fluoridate our drinking water. This is the right thing to do."