Henry Liu: Arrested, Locked in a Mental Ward, Discredited -- On the Word of One Accuser

What if someone you barely know, who believes in the healing power of angels and 'the Violet Ray,' tells an influential person that you have uttered a horrible threat – but you haven't?

And when police come knocking at your door as you sit eating lunch and watching the Colbert Report, you are so taken aback by the fact that they are evacuating your building that you can't answer their questions coherently?

Now imagine that these same officers have handcuffed you in your own home and are suggesting that you are a homicidal maniac, and would you be willing to go for a psychiatric evaluation?

You agree – and end up locked into a psychiatric ward for almost a week before being released with a clean bill of mental health.

Arrested in his apartment and taken to Oregon Health and Sciences University for a mental health evaluation, Liu stands accused of threatening two members of the PSU faculty. Liu's expulsion hearing documents say that the alleged witness says Liu said, "I'm about ready to stick a .45 in his ass." It's unclear how that translates into threatening two professors, as the expulsion hearing recording is not public and those who participated in it were sworn to secrecy.

Banned from the campus for nearly four months before the expulsion hearing which resulted in his dismissal from the university, Liu is now awaiting an appeals hearing.

Liu's law school admission and financial aid package went up in smoke after PSU broadcasted a warning that he was a threat to the campus.

He still hasn't been charged with a crime, but police say the investigation is open; Liu spends his days worrying about whether Portland Police will arrest him again for some further offense relating to the alleged threats.

A review by The Skanner News has revealed three key weaknesses in PSU's he-said/she-said case:

-- Who investigated the credibility of the alleged witness and how did they do it?

-- Once Liu's mental health was cleared by the psychiatric examination, who had  access to that federally-restricted information, and was it taken into account before PSU issued its "timely warning" about the threat to the campus?

-- Was PSU's use of a "timely warning" in keeping with federal law?

"There is nothing in this world that can give me back what these people took from me, did to me and put me through," Liu said this week. "I don't think anyone really knows what my family and I are going through and how we are trying to survive this.

"The conditions of the psych ward were never described, and not once has the university personally reached out to me asking about my safety and well-being," he said.

"I've suffered physically and emotionally too much and continue to be named like some kind of criminal to a crime I did not commit."

So does any and every threat uttered on a college campus make it to the level of a public bulletin and a visit by the police?

Liu doggedly contends that he never made threats to anyone, and documents show that there is no physical proof that he did – only the word of the unnamed accuser. 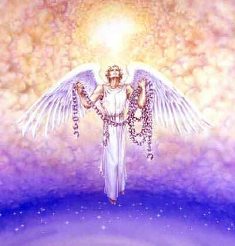 The Skanner News has learned the identity of the alleged witness, but we are not identifying her publically. The woman, a fellow student of Liu's in the PSU Conflict Resolution Department, advertises herself on the Internet as a "Master Instructor & Healing Practitioner of Integrated Energy Therapy (Angelic Healing Modality)."

Her pastel pink webpage on the Angel meetup group site explains: "IET is a hands on healing that taps into the healing energy of Angels, 12 strand DNA activation, Sacred Geometry and the Violet Ray."

She has also posted enthusiastic reviews on the Facebook page of a Croatian "gaze healer."

Reached by The Skanner News via Facebook, and asked whether there is any proof of Liu's comments other than her own testimony, the alleged witness cut the exchange off and said she never wanted to be contacted again.

The question remains: Who at PSU did their due diligence before hitting the panic button?

Officials at the university did not offer specifics of their process.

"The decision to issue a timely warning was based on available evidence and vetted through Portland Police Bureau (PPB), Senior Administration, and the CARE [Coordination Assessment Response and Education] Team," a spokesman said in an email.

The Skanner News asked whether there are any requirements of evidence, or any other mechanism to prevent false accusations or the misuse of the system.

"The standard is 'considered by the institution to represent a threat to students and employees' each is decided on a case by case basis," the spokesman said in an email.


All sides in the Liu case agree that neither PSU nor the Portland police are allowed access to Liu's psychiatric evaluation because of federal HIPAA laws.

Yet it was campus security and the police bureau who urged Liu to submit to the evaluation – which Liu says he was told would take 72 hours, but it stretched into 6 days because he was admitted on a Friday and no staff was available to perform it until the following week.

The appeal document for Liu's expulsion from PSU shows that the results of his psychiatric evaluation were not allowed as evidence in his original expulsion hearing.

So how is a sane person supposed to prove their sanity when faced with accusations of being a homicidal maniac?

Liu says he authorized his primary care doctor to give the evaluation results verbally over the phone to Dr. Dana Tasson, who heads the Center for Student Health and Counseling; Liu says this was done.

However it's unclear what happened with that information.

The hospital records and primary care providers are not the only place where the results of his clear psychiatric evaluation could have been obtained; it should also have been in a boilerplate report by the court investigator who got him out of the psych ward, Liu says.

PSU has not confirmed whether it has the court report. A spokesman for the university confirmed that "we do not have access or control over these medical records."

As to whether the police bureau has Liu's evaluation results, a Portland police spokesman said he would pass on The Skanner News inquiry to the District Attorney's office, which now has the case.

'Timely Warning' Not so Timely? 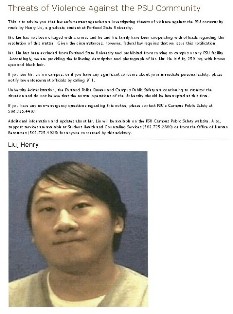 Liu's face popped into the media limelight last April after PSU security issued a bulletin implying that he constituted a threat to the campus.

The emailed flyer with a large image of Liu's ID photo said:

"Mr. Liu has not been charged with a crime, and he and his family have been cooperating with officials regarding the resolution of this matter."

The poster itself, which was hung all over the school and continues to circulate on the Internet, has no date stamp on it – it could be a year old, or a day old.

Only in a different posting on the PSU campus security page – this one without a photo of Liu -- is there a posted date.

The Clery Act requires colleges and universities to use a "timely warning" to notify their communities "upon confirmation of a significant emergency or dangerous situation involving an immediate threat to the health or safety of students or employees occurring on the campus," according to the US Department of Education Handbook for Campus Safety and Security Reporting.

"An 'immediate' threat as used here encompasses an imminent or impending threat, such as an approaching forest fire, as well as a fire currently raging in one of your buildings," the guidelines say.

In the Liu case, the "timely warning" was not so timely.

The record shows that on April 19, a fellow student who was not identified told a professor that Liu had made threats of gun violence against the university; the report was then carried to PSU campus security.

But the upshot is that Liu ended up voluntarily turning over all of his four legally-owned firearms – which he had been trying to sell -- to the police before being driven to OHSU.

The "timely warning" was not released until he was released from OHSU with a mental status examination showing he was no danger to himself or others – a week after the alleged threats were reported and six days after his weapons had been relinquished to the police.

While the facts of his expulsion from Portland State University continue to emerge, one point appears to have sealed his fate with many: Liu owned four guns.

In fact Liu says he had been trying to sell his guns and ammunition for months, to come up with the money for back surgery. Some links to the online sales postings have expired, but The Skanner News has confirmed at least one can still be read.

"BRAND NEW, UNFIRED. GOING IN FOR SURGERY, MUST SELL," the notice says.

Liu has not been accused of carrying a weapon on the campus itself. But in liberal Portland, Ore., simply having weapons has made him a suspect.

"For us death threats and guns in [a] University setting equals a crime and grave concern about the safety of all the students and staff at the university," said Portland Police spokesman Robert King in an email last week.

"We have seen more school shooting than we ever thought possible and so of course we want to do all we can to make sure that does not happen here."

To date, Liu has been charged with no crime, has no history of violence and on day one voluntarily gave his firearms to the police.

Yet even today, he has been branded a gun-toting threat to the public at large.

"I was handcuffed upon admission of owning firearms," he told The Skanner News. "This after inviting the officers into my home to establish some kind of understanding of why they were there."

Robert L. Shibley is the vice president of the Foundation for Individual Rights in Education, and a columnist for The Daily Caller.

On www.TheFIRE.org, Shibley and his colleagues report on First Amendment issues in higher education, and at times advocate for students in disputes with their schools.

Shibley says that cases like Liu's are not "extremely frequent," and that when they do happen the students are typically shamed into not making a public case.

Shibley, whose organization champions what he calls "individual rights," said that university risk management attorneys around the country have been hammering out what their clients should do in cases that might lead to a Virginia Tech-style situation.

"They have an agenda that's not just risk management but is also political," Shibley said. "The rubrics risk management groups use seem to impinge on peoples' individual rights."

But, Shibley says, uses of the Clery Act around alleged threats on campuses is still a relatively new thing; policies and practices are still evolving.

"One of the things that's worth remembering is that when a member of the university community is suspected of being violent, the university should have a system for evaluating the credibility of the accusation," he said.

"If the student has been found to have done nothing wrong, there should be no consequences for the student.

"One thing we should not do is expect universities to be mind readers and anticipate every single problem that could come along – I think we need to have realistic expectations," Shibley says.