Inspired by the City Repair project, artist Kymberly Jeka wanted to create a community mural on her street. The intersection of North Haight and Emerson streets, she thought, would be an ideal spot to paint a street mural. The idea behind intersection murals is to bring community members together to reclaim urban streets as gathering places.

The shooting of DeAndre Clark, on October 21, 2011, just steps away from the intersection, simply strengthened Jeka's determination to move the project forward.

"There's a shrine there, where people light candles for DeAndre," she says. "What an opportunity to make some beauty here, instead of just that loss." 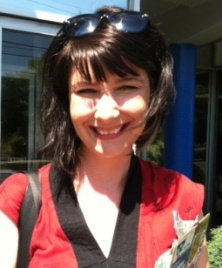 Jeka took her idea and a picture of the proposed design to every neighbor within two blocks of the intersection. Everyone signed. She also visited business owners, the Salvation Army, the Chapel Pub, and received encouragement from everyone she spoke to. Jeka hopes that the Jefferson High School students who cross the intersection every day will want to help paint the mural. So she took her design and petition to Jefferson too.

"I have 57 signatures," she says. "To go ahead you have to have 80 percent agreement from neighbors. I have 100 percent.

"It's been wonderful meeting all these people."

The design Jeka envisages is a rainbow of intersecting triangles that make up an elliptical shape.

"The design represents Unity and Community," Jeka says. "It represents diverse neighbors coming together and working as one."

Some of the triangles are missing from the circle. Instead they will be painted on the surrounding streets. That represents people coming into the circle of community, she says.

Next step for the project is to get approval from Portland Bureau of Transportation. If approved, Jeka hopes donors will step up to help her buy the paint.

Painting the mural will take about a weekend, and the paint will dry within hours, she says. She hopes that lots of people, including some Jefferson High school students, will want to take part in a big painting party.

"I feel people can become proud of it," she says. "What a great thing to be able to say, 'I was part of creating that.'"