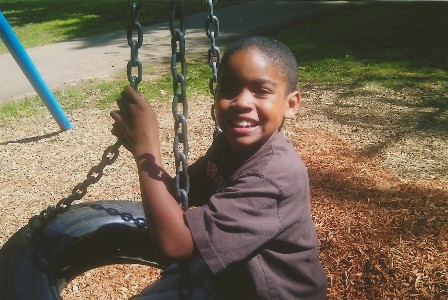 When 9-year-old D'Anthony Dancer fell down while playing, his mom brought him in and iced his knee.

The following Monday he went to school and fell twice; his mom iced his knee again.

"Then he woke up and he was limping to his left, and I thought he had dislocated his hip or something," Toi Chanelle Lewis says. "So we went to the emergency room."

There D'Anthony was diagnosed with a large malignant brain tumor – a high grade glioma – essentially the worst diagnosis possible.

"He had a very large and rare tumor, that's the most aggressive tumor," she said. "They don't know how long he's had it," but they believe it's been less than a year.

"They started chemo and radiation on May 15, and three weeks after that they couldn't do it any more because they said the treatment was making it progress faster.

"They said take him home and enjoy the quality of life you have with him. And that's what I did," Lewis said.

Then on Thursday night, doctors told Lewis that they had done all they could do.

"They are giving him approximately 10 days," Lewis said. "Ten days at the most."

Thursday, July 26, Interstate Lanes holds "Bowl for Blessings," where $11 tickets buy two games plus shoe rental; all the proceeds go to the cost of D'Anthony's care.

Then on Sunday, July 29, Applebee's restaurant at Lloyd Center hosts "Dining for D'Anthony." Free tickets are available at businesses around Northeast Portland, where the Dancer Lewis family lives.

All day on July 29, from 11 to close, people who eat at Applebee's can then give their ticket to the server along with their bill, and the restaurant donates a portion of that to the family.

In addition, supporters have set up a page for D'Anthony on the cancer-support website MyLifeline.org.  There is also a Facebook page for updates on the child's condition.

Lewis, D'Anthony's father Anthony Dancer, and the child's two brothers and sister are all helping with round-the-clock care.

On Friday morning, Rev. Renee Ward, who has been a spiritual advisor the family, baptized D'Anthony, his mother, father and siblings.

Despite rumors that the boy's hospital turned the family away after minimal treatment, Lewis says the opposite is true: D'Anthony's doctors at Legacy Randall Children's Cancer and Blood Disorders Program provided excellent care.

"I couldn't have asked for better care," she says. "Sometimes there's nothing they can do."

Ward also praised the facility's referral to a hospice.

"Some people think hospice is where they just send you out to die, but in fact they offer a lot of services by people who are caring and specialize in end of life," Ward said.

The Centers for Disease Control and Prevention reports that cancer is the fourth most common cause of death for people ages 1-19; unintentional injury, homicide, and suicide are the top three.

Lewis says D'Anthony just got his immunization about six months ago, and suggests that perhaps young children should get a more substantive check up when they go in for shots.

"You never know what's going on, you just have to know your child," she says.

"I just knew he wasn't walking right. But if we had some way of finding out when we brought him in for shots, maybe we would have found out sooner."

The Terry Family Funeral Home is serving as the family's fiscal agent and donations can be sent in the form of a check, cash or credit card on behalf of the Dancer-Lewis Family. Call Dwight Terry at 503-249-1788 to submit your donation, or send it to as 2337 N. Williams Ave., Portland, OR 97227.