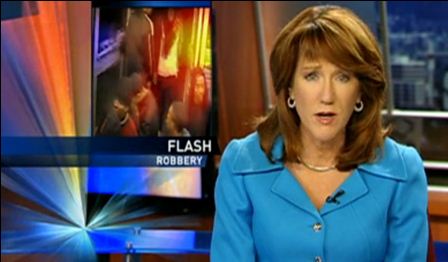 Since April, security camera footage of Black teens has been a staple of the nightly news. The kids have been labeled as criminals and thieves. Witnesses have come forward, claiming they feared for their lives. These "flash robs" were a new phenomenon that seemed to be sending Portland into disarray.

That's if you watched the news anyway.

The Skanner News' review of the incidents – including interviews with affected businesses – highlights how overreactions to the petty thefts became the fodder for blogs and "tough on crime" police statements to media while misbehaving teens were depicted as boogeymen.

The issue is at the top of law enforcement's agenda this week as the regularly scheduled Portland Gang Task Force will address "flash mob protocol." The next meeting, 10 a.m. Aug. 3 at North Precinct, is open to the public.

Some of the most dramatic coverage came from a so-called "flash rob" at a Troutdale Albertsons.

"A mob of about 30 to 40 teens targeted a Troutdale store last weekend, stealing goods and trashing the place," reads a news article from Seattle's King 5 News.

News channels throughout the Northwest replayed the security footage.

According to KGW, "Security officers chased the thieves out, but no one was captured. They also left employees pretty shaken up, including one woman who was in tears after getting terrorized by the robbers."

Sgt. Steve Bevens of the Troutdale Police Department told The Oregonian that his department wanted to make an example of the teens. They would face jail time for felony crimes. According to KOIN news, Bevens even wanted to charge their parents with failure to supervise.

Sgt. Bevens didn't respond to repeated requests by The Skanner News for comment.

When this reporter took a trip to the Albertsons where the incident took place, there was no sign that any disturbance had happened. Customers were laughing and smiling with employees and a baby occasionally cried a few aisles over.

According to Albertsons External Communications Field Manager Lilia Rodriguez, "This incident was more of a nuisance. There was a party happening nearby and a group of kids (about 17 or so) wandered on over to the store. They came in, messed with some donuts, some produce and took some soft drinks. No, there was no effect on the store's business.  The amount of damage was minimal. What was reported on the news (in relation to this incident) was inaccurate."

Although the media account differed from the perspective of those supposedly attacked, it did resemble reports of similar nuisances.

A SE Portland Chevron was hit by a so-called "flash rob" in early April. The owner compares the teens to a gang in a KGW report on the incident. According to the story, the 20 teens took $200 worth of merchandise. A KATU report on a different incident reveals that some of the teens from the Chevron incident confessed to police.

Several days later, KPTV reported on an incident at the Lloyd Center Nordstrom, where ten teens took $550 worth of merchandise. It was called a robbery even though a robbery is defined as "the felonious taking of personal property from someone using force or the threat of force." There is no indication in the security footage that the teens used force or any threats of such to walk off with the items.

Lastly, there was an incident at an East Burnside Max Mart & Deli at the end of April. A KATU article quotes a manager, who wasn't seriously injured but fears the teens will come back and things will be worse. He even goes as far to say that he doesn't want to die making minimum wage.

The KGW article on the Chevron incident says that nationally, one in ten retailers have reported being the victims of what police have recently decided to label "flash robs," as opposed to shoplifting.

The result is two different pictures of theft. For example, when one does a search on Oregon Live for the term "shoplift", the results contain a vast majority of white suspects. Most of these cases refer to thefts of hundreds of thousands to millions of dollars.

Meanwhile, a search of "flash rob" stories yields incidents exclusively involving Black teens, with thefts of less than $600. Despite the minor damages, in comparison to the shoplifting search results, the tone of the "flash rob" stories is more frantic, with witnesses proclaiming fear and worries of future attacks. Many of the shoplifting stories, however, actually describe serial offenders.

The "flash rob" label was picked up by far right blogs.

For example, Hunter Wallace of Occidental Dissent posted that "the Black Undertow of Oregon has become the national flagship of flash mobs".

In a previous post, he spells out his thoughts towards Blacks when he says, "Without that 'racism' and 'white supremacy,' Portland will inevitably shed its Whitopia status and become a Black Undertow city like St. Louis, Birmingham, Detroit, Chicago, Philadelphia, Minneapolis, Milwaukee, or New Orleans. In demonizing the South for Jim Crow segregation, Northern liberals like Brooks D. Simpson are inviting the Black Undertow plague to move into and spread terror into your own communities."

According to the police press release, officers responded to reports of 150 drunken teens at the park. Allegedly, they found a white teenager who had been beaten up and claimed 5-10 Black teens were responsible. The victim, who said he was also robbed, claimed that the perpetrators had also attacked a transient, according to the report.

The next night, three white men said they were attacked by 20-30 Black teens after yelling at them for allegedly throwing bottles.

No one has been arrested in either incident and there are no active searches for suspects. According to Sgt. Pete Simpson of the Portland Police, they have nothing specific to go off of.

Nonetheless, the far right blogs have reported on the incidents with a much different tone.

One conservative blog, Fellowship of the Minds, says 150 Black teens attacked whites in the park.

Newsnet 14, which proclaims it is "World News for Europeans World Wide", put the number at 150+.

"We see the same twists on the truth," says Simpson. "People twist these things to their own interests."

Simpson says the police's concern is from a community standpoint. He asks that parents be parents to their children and discourages any thoughts of vigilantism.

Most of the discussion of these incidents involving Black teens has focused on fear and punishment, often criminalizing the youth involved.

The broader issues affecting teens, and Black teens in particular, have largely been ignored. According to the Oregon Employment Department, of the 40 percent of people ages 16-19 in the labor force, 30 percent are unemployed. Oregon, like the rest of the country, has a Black unemployment rate that hovers a few percentage points above the overall numbers.

Blacks are also overrepresented in Oregon's poverty statistics. One in two Black children in Oregon lives in poverty, according to the US Census Bureau and nearly 30 percent of Portland's homeless families are Black.

When these factors combine with gentrification and the overrepresentation of Blacks in Oregon's prison system, it increases the risk factors for kids to act out.

As reported by The Skanner News' Helen Silvis, a New York City study says the two factors that are most important in steering youth from risky behaviors are adults who care about them and being a part of a youth group.

Nonetheless, mainstream media outlets have not used these incidents to tout available youth resources even though programs for at-risk youth and after school services, among other resources were recently up for cuts in Portland's 2012-13 Budget.

Whether or not fear laced coverage will motivate more investment in young people remains to be seen.