By Helen Silvis of The Skanner News
Published: 27 February 2012 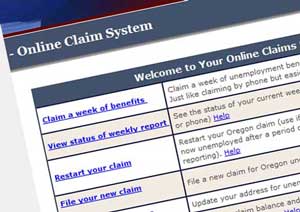 The ratio of out-of-work Oregonians to jobs is six to one. That's according to the latest jobs report from Oregon Employment Department.
The state jobs agency surveyed employers last fall and found 30,400 job vacancies in Oregon during October. About 176,400 Oregonians were looking for work that month, the agency estimates. The ratio is slightly better than in 2010, when 6.5 people were unemployed for every job vacancy. Nationally the figure is 4 people for every job vacancy.

"In 2010 we found just over 30,000 job vacancies and in 2009 we found 18,200 vacancies, so the good news is that we have had a pretty good increase in job vacancies over the last two years," said Charlie Johnson, a senior economic analyst with the State of Oregon, and the author of the report.  'The bad news is that in 2008 we had about 40,000 vacancies, so we are definitely not back up to that pre-recession level of hiring."

Nationally, economists have reported signs of recovery, from the two-year long downturn that's been named, "The Great Recession.""I think the storyline is that that there is a slow and steady recovery, but not a sharp increase in the number of jobs out there," Johnson said.
Jason Gettel a policy analyst with the Oregon Center for Public Policy said we still have a long way to go to repair the damage done during the recession.
"Taking into account population changes, the number of jobs per 100 working age Oregonians is not projected to reach its pre-recession level until 2017."

Urban League Prepares to Launch 8-point Program
People of color, particularly African Americans, have been harder hit by unemployment than other groups. Nationally, the January unemployment rate for African Americans was 13.6 percent. For Hispanics, it was 10.7 percent. Overall the rate is 8.3 percent.
Marc Morial, president and CEO of the National Urban League, says the league will be pushing an 8-point jobs plan to level the playing field for people of color.
"Clearly, more must be done to ensure that our economy's rising tide lifts all boats." Morial says in a commentary.
"That is why we are issuing a call for immediate national action around the education and job-training steps necessary to bring jobs back to communities most in need.  Any serious discussion of job creation and economic opportunity must offer solutions for the obvious shortcomings of our current national approach to education, from early childhood education to adulthood and beyond.  A broken national system of education and job training will continue to yield a broken economy."

The Urban League of Portland runs a workforce development program to combat the resulting poverty. Policy analyst Debra Lindsay says the basic plan for 2012 is to offer recruitment and careers assistance, along with job readiness training, skills upgrade classes, a job club and resume assistance.
Jobseekers can find the Urban League's job postings on Twitter, on their Facebook page or by going into the Urban League building at 10 N. Russell St., Portland, and looking at the job book. Also available at the office is access to computers and a career resource room.
"We 're not like other public resources in that we don't put any limits on how long you can use our computers," Lindsay said. The only limit to how long you can use them is whether they're available and if someone else needs to use them."

Where the Jobs Are

With 59 percent of Oregon's job vacancies in Portland and the tri-county area, the report found the jobseekers to jobs ratio is slightly better in the city than in other parts of the state. Vacancies in the Portland Tri-County area were more likely to require previous experience, less likely to require a license or certificate, and more likely to be for temporary or seasonal jobs compared to other areas of the state.

The bad news for entry-level jobseekers and people who have been unsuccessful finding work in the past, is that employers are looking for work history.

"We found that about three-quarters of all job vacancies require previous experience," Johnson said. "So for any subgroup that has had more difficulty finding jobs in the past, they're going to find it very difficult to have previous experience to put on their resume."

Where were the jobs? The report showed that 19 percent were in health care and social services, the highest percentage in any one sector. Sales, administrative support and waste services each accounted for about 14 percent of vacancies. Three specific occupations had more than 1,000 vacancies each: retail salesperson, heavy or tractor/trailer truck driver, and customer service representative.

"For jobs that only required a high school education, the average hourly wage was less than $15 per hour, compared to $20.04 per hour for vacancies requiring an associate or vocational degree, $28.05 per hour for a bachelor's degree, and $34.54 for a graduate degree. Nearly 60 percent of the jobs available offered a starting wage below $15 per hour."

About 64 percent of the vacancies were for full-time positions, and 79 percent were for permanent jobs.

Almost half of all vacancies, 48 percent, were in small companies of less than 50 employees. Medium sized employers (50-249 employees) had 31 percent of the jobs and large companies (250+ employees) 21 percent. Large employers were more likely to be hiring for high-paying, full-time positions.