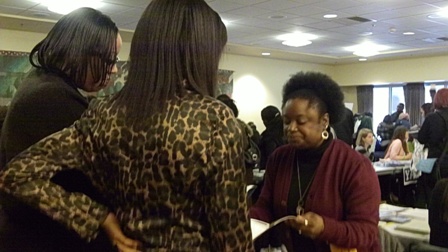 She and her staff put together loads of materials and special assistance just to make sure as many youths as possible understand all their post-high school options.

But even Livingston – who has immersed herself in university admissions – was shocked at the Obama Administration's reversal last week of his predecessor's elimination of race as a qualification for college admissions.

The U.S. Departments of Justice and Education released a joint statement Friday sketching out the new guidelines – which clearly walk a tightrope between past Supreme Court decisions and the need to encourage more racial diversity in higher education.

"Ensuring that our nation's students are provided with learning environments comprised of students of diverse backgrounds is not just a lofty ideal," wrote Attorney General Eric Holder. "As the Supreme Court has recognized, the benefits of participating in diverse learning environments flow to an individual, his or her classmates, and the community as a whole.

"These benefits greatly contribute to the educational, economic, and civic life of this nation," he said Friday.

The crisis of college enrollment for African American students is stark: Historically Black Colleges and Universities, which have for more than 100 years graduated more Black students than any other institutions, are seeing enrollment drop-offs that threaten to shutter some campuses.

Throughout the system of higher education, U.S. Department of Education statistics show that men of color are particularly absent from the university classroom: overall graduation rates for African and African American males are about 33 percent; for Black women the rate is just under 45 percent. The entire university system graduates just 57.3 percent of students.

The statistics are cited in article on America's Wire by Marjorie Valbrun, "Black Males Missing from College Campuses," published earlier this year, which explores the issue in depth.

Friday a coalition of Civil Rights groups leaped to back up the new admissions guidelines, which they say "provide a roadmap for K-12 schools, colleges, and universities to implement the voluntary diversity and integration standards set by the Supreme Court's decisions in Grutter v. Bollinger (2003) and Parents Involved v. Seattle Schools (2007)."

"Racial segregation and concentrated poverty are increasing in our nation's schools, suggesting that we are backtracking on the successes of the civil rights movement," the civil rights groups said. "Many schools are more racially isolated today than they were in the 1970s. Today's guidance recognizes the harms of re-segregation and the benefits of diversity."

That statement was signed by the ACLU,  the NAACP Legal Defense & Education Fund, and three other community-of-color legal associations.

Conservative observers decried the smackdown of the Bush Administration's anti-race policy. The Wall Street Journal cited a case pending before the U.S. Supreme Court concerning the University of Texas at Austin, where a plaintiff seeks to shut down "a race-conscious admissions policy."

The Journal quotes an anti-race activist predicting the new guidelines will be overturned.

"We decided to put together this event because there are so many of our students who needed help and guidance," Livingston said.

Coming quickly behind the BUF is the Oregon Community Foundation, which announced Monday it is dishing out $40,000 to the BUF to bolster its higher education programs; in addition, it awarded $25,000 to Elevate Oregon to improve high school graduation rates; and $25,000 to Campfire Columbia for their Cradle-to-Career program.

"On top of that we have a huge scholarship program too, where we give scholarships to more than 2,000 students all over Oregon," said Joan Vallejo of the OCF. "Another huge barrier to higher education is funding – that much we know."

Livingston says the BUF is committed to continuing its annual college fairs as well as ongoing help and mentoring for young people who want to go.

Livingston said more volunteers from the community are needed to give one-on-one support to the young people who come in for guidance. She said the BUF's programs are also always open to area sponsors who wish to pitch in with resources, as Portland State University and The Skanner News did with the college fair last week.

In addition, Kaiser Permanente and Wieden+Kennedy contributed cash for four $500 scholarships for high school and college students at the fair.

"If we can come alongside a student and really help them? That just pleases my heart so much," Livingstone says. "Today we have students from as far away as Philomath, Oregon – so we're doing it because we want to be that resource."

For more information go to the Black United Fund website at www.bufor.org