PORTLAND, Ore. (AP) -- In the hours after the midnight Saturday eviction deadline in Portland, the anti-Wall Street protesters and their supporters had flooded the park area. The crowd swelled to thousands as people  joined the protesters to support their message that wealth inequality has become unsustainable.

By dawn Sunday morning, however, just about 200 people remained in the camp, many exhausted after an evening of celebration, followed by the confrontation with police. One policeman was injured when a man threw an object that hit his leg. Protesters, who have said they are committed to nonviolence, pushed the man out of their midst, and he was arrested. 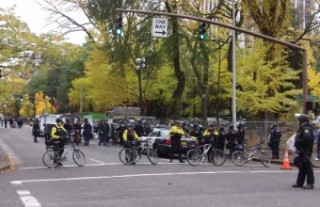 His sentiments were echoed by several other protesters who had spent the night. But while some protesters danced and others slept, parks staff and police remained on the scene.

"The folks who have stepped up from Occupy Portland – I have nothing negative to say about them," said Art Alexander, safety manager for Portland Parks and Recreation. "They have been awesome. And so have Portland police."

One organizer declared the night a victory for the movement. "We stood up to state power," Jim Oliver told The Associated Press.

The celebratory mood was short-lived. Police moved in to clear the park Sunday morning. An officer on a loudspeaker warned that anyone who resisted risked 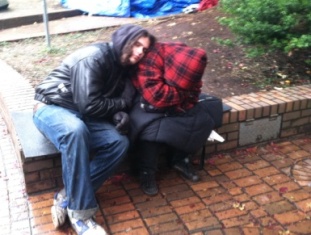 arrest and "may also be subject to chemical agents and impact weapons." Demonstrators chanted "we are a peaceful protest."

"We were talking about what we were going to do and then they just started hitting people. Seems like a waste of resources to me," protester Mike Swain, 27, told the AP.

One man was taken away on a stretcher; he was alert and talking to paramedics, and raised a peace sign to fellow protesters, who responded with cheers.

Portland Mayor Sam Adams Sunday defended his order to clear the park, saying it is his job to 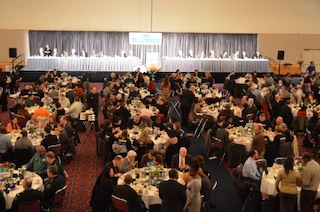 enforce the law and keep the peace. "This is not a game," Adams said. 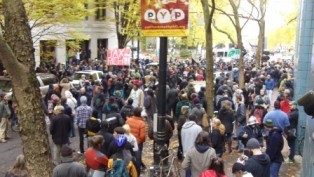 Officials said that the injured officer suffered minor injuries. Police had prepared for a possible clash, warning that dozens of anarchists may be planning a confrontation with authorities.

Some of the latest developments in the other Occupy protests:

Friends say that Scott Olsen, the Iraq War veteran who suffered a serious head injury during a police raid on the Occupy Oakland encampment, has been released from the hospital.

Olsen suffered a skull fracture during tear-gas filled clashes between police and demonstrators on Oct. 25.

The 24-year-old Marine Corps veteran had been attending Occupy protests in San Francisco and Oakland after working his day job as a security software engineer.

Dottie Guy of Iraq Veterans Against the War said Sunday that Olsen was released last week. She says he can now read and write, but still has trouble talking.

Police spokesman Carlos Manfredi said a protester slashed an officer's hand with a pen knife while another protester shoved an officer, causing facial cuts. He said neither officer was seriously hurt. He said the assailants couldn't be located.

About two dozen protesters at Kiener Plaza in downtown St. Louis were arrested Saturday for failing to comply with a city order to leave the park overnight.

Mayor Michael Nutter said Sunday "intolerable" conditions at the Occupy Philadelphia camp and a lack of cooperation among protesters has forced him to beef up police presence at the tent city outside City Hall.

The mayor said posting more uniformed officers in the Dilworth Plaza area has become necessary because of growing health and safety concerns and a fractured leadership at the camp that has left the city still pressing the protesters to move to make way for a $50 million construction project.

The mayor stopped short of saying the protesters, who occupy dozens of tents outside City Hall, would be evicted or forced to relocate.

Meanwhile, police say a suspect was arrested following a report of a sexual assault at the encampment. Officials say police were called shortly before 8 p.m. Saturday after a 23-year-old woman reported that she had been dragged into a tent and assaulted.

In Salt Lake City, police arrested 19 people Saturday when protesters refused to leave a park a day after a man as found dead inside his tent at the encampment. The arrests came after police moved into the park early in the evening where protesters had been ordered to leave by the end of the day. About 150 people had been living in the camp there for weeks.

Following the removal of tents, the city parks department moved in with a front-end loader and dump trucks to remove pallets, boards and garbage left by the protesters.

Two dozen Occupy Albany protesters who defied an 11 p.m. curfew in a state-owned park were arrested, authorities said. State police officials hauled away the protesters late Saturday night after warning them with megaphones that they were breaking the law in Lafayette Park. They were charged with trespassing.

German police say more than ten thousand people protested against the banks' dominance in two of the country's major cities.

Police in Frankfurt, continental Europe's financial hub, said some 9,000 people peacefully protested near the European Central Bank's office tower in the city centre. Police in Berlin said demonstrators formed a human chain surrounding parts of the capital's government district to call for an end to excesses of financial speculation and urge the government to dismantle big banks.

Berlin police said "several thousand" people took to the streets Saturday, but organizers of the protest - which was inspired by New York's Occupy Wall Street movement - said turnout was about 8,000 in Berlin and 10,000 in Frankfurt.