By Helen Silvis of The Skanner News
Published: 04 November 2011

The Coalition of Communities of Color has released a report on Portland's Native American community that shows deep disparities in employment, income, graduation rates, children taken into foster care and more…

For anyone who doesn't already know the history of Oregon's Native Americans, the 100-page plus, must-read report is shocking in its descriptions of "genocidal policies" that began before the state was officially founded and continued through the 20th century. Examples include: broken treaties, forced relocation, theft of native lands, forced sterilization, children taken from families and outright killings of Native people.

"Our faith traditions were outlawed until 1993, and our children were forcibly removed from our care and placed in residential schools, stripping our youth of culture and community, " the report says.

"…we have been forcibly moved from productive lands several times through history, with the most recent being in 1956 when we were forced from reservations and into poor urban areas – with little more than a one-way bus ticket. It is this recent history which is a key factor in how Portland has emerged as the 9th largest Native American population in the USA." 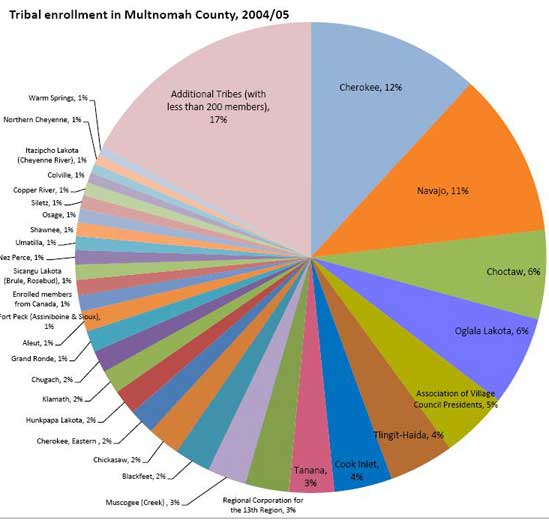 The Native American Community in Multnomah County: An Unsettling Profile, is the second in a series of seven, that will look at Portland's Communities of Color in detail. The first powerful report took an overview, and each of the others will profile a community in greater detail.

Familiar to African Americans will be this report's key points: Firstly, this long history of brutality and repression remains a central experience for Native American communities. Healing is a long-term journey. Secondly it's not just about history. Institutional racism endures and hurts to this day.

The results can be seen in a host of statistics many culled from the 2009 American Communities Survey, that show deep and worsening levels of disparity and inequity. Compared to Seattle's King County, the disparities are on average 36 percent worse. Portland now is home to 28 Native American organizations working to heal these ills. But as the report details they have a long climb ahead. 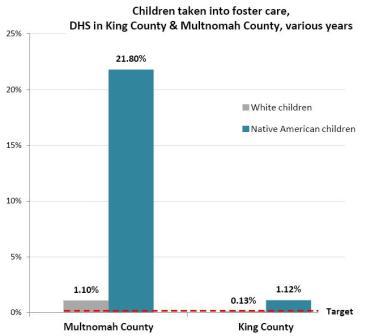 One of the saddest statistics in the report is that more than one in five Native American children in Multnomah County are in foster care, a rate 20 times higher than for Whites.

For African Americans the rates are twice as high as for Whites. Yet studies show that Native Americans (and African Americans) are NOT any more likely to abuse their children. As experts at Tuesday's Shoulder to Shoulder conference on children in foster care explained, most children are taken into care for neglect. And neglect is connected with poverty because it often amounts to families being too poor to feed, clothe, house and care for their children. 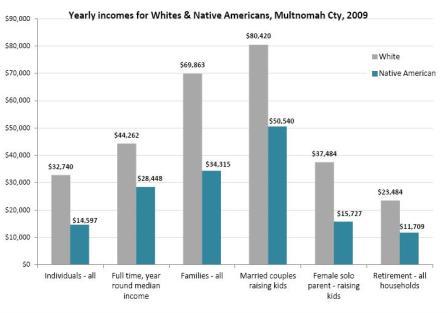 Unemployment is 9 percent for Native Americans compared to 5.3 percent for Whites. But as the report shows this doesn't tell the full story. Taking account of those who are recently laid off, those who are not working and not receiving retirement or disability income, the real unemployment rate rises to 31 percent.

"The economy is failing to provide the vast majority of Native Americans with decent jobs at decent incomes," the report says. 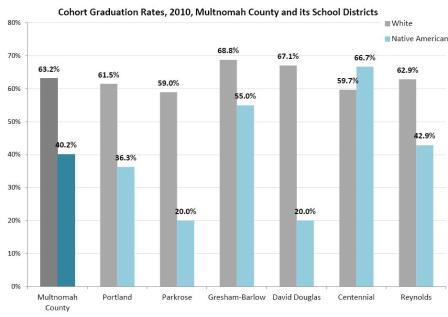 Similarly troubling are the disparities that exist in housing, healthcare, hunger, incarceration rates and education. Some key figures include:

Fewer than half of Native children graduate from high school. Those who do are less likely to pursue higher education and find well paid jobs.

At least 9 percent of Portland's homeless people are Native Americans, far higher than their numbers warrant.


Racism takes a tremendous toll on health, the report notes.

"We are becoming aware that the physical toll of living with racism and its daily indignities harms several essential bodily functions such as blood pressure, maternal health, hormonal balance (with high rates of the stress hormone, cortisol, understood to be pronounced among communities of color), and mental health. Nowhere is the toll of racism higher than the experience of Native American youth who are likely to commit suicide at levels that are 70 percent higher than among the general population."

Yet despite the statistics, Native Americans hope for a better future.
"We seek equity, fairness, and a set of reforms that are entrenched in policy commitments that move the Native American community towards a brighter future," the report says. "Now is the time for change."


Coming Next:
Communities of Color Report on Native Americans Part Two: Nicole Maher to Portland; Admit it You Have a Problem With Race