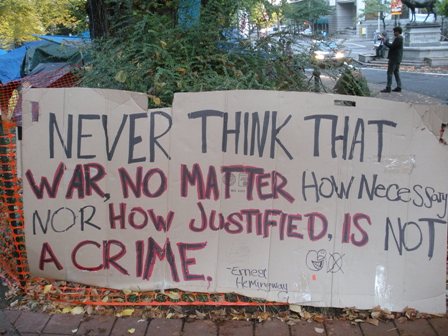 When walking through the Occupy Portland camp, there is a noticeable lack of people of color. Supporters of all races have tried to get underrepresented parts of the Portland community involved, as well as address their specific concerns and the underlying tensions that have been lost in media narratives.

Adrian Adel, a supporter of the movement, says she has seen a disgruntled consensus among many people of color in the Portland community.

"Low income people and communities of color have been screaming this for years," she says. "I saw a woman holding a sign that said 'Save the Middle Class'. But we've been in a recession for 200 years. We've been eating top ramen."

Occupy Portland, as well as the larger Occupy Movement, has addressed broader issues of income inequality and lack of jobs. Many of the signs around the camp challenge things like corruption in politics, the military industrial complex and the nearly 275 percent income increase for the top one percent in the last 28 years.

However, there is little signage mentioning problems like gentrification and providing students with culturally relevant education.

"No one here has addressed racism," says Jessie Sponberg, another supporter of Occupy Portland. "But it's super important."

He participated in a rally at Lloyd Center, designed to recruit more people to come down to the camp but says it wasn't successful because people looked at the Occupiers as if they were trying to sell them something.

Occupy Portland is planning to have people gather downtown to withdraw their money from large commercial banks starting Tuesday. Denise Millhollen, who got involved in the Occupy Movement during a trip to New York, thinks activities like these that directly impact people in all communities will help skeptics see the relevance of the movement.

"Large commercial banks have not been a friend to people of color or lower socioeconomic class," she says. "They have set up all types of schemes, including reckless speculation and mortgage fraud. I don't see why anyone would be reluctant to take their money out."

She also notes that areas like Chicago have additional movements like Occupy the Hood, which address more specific issues facing low income communities and people of color. This can be replicated in other areas where communities don't feel their immediate needs are being addressed by the broader Occupy Movement.

Another issue that supporters feel is deterring more participation is lack of organization.

During Saturday's general assembly, speakers made numerous references to the importance of cleaning up the camp. The first speaker made a point to address the infighting that is hurting the movement's message and fueling negative reports.

This was highlighted last week when Jason Parker, a black man, was  arrested at Occupy Portland for allegedly displaying a gun, despite having a concealed weapons permit. According to the police report, some occupiers called him a racial slur in the heat of the argument.

"There are some racist people down there," says Adel. "You can bet these people want to overthrow the government too."

Rich Ronch, thinks it would help to have more leadership in the form of representatives of color. He says simply getting more people involved would help address this.

"This is our community, whether we want some people there or not," he says. "It's a must we get out there."

While supporters acknowledge that Occupy Portland isn't perfect, they emphasize that the positives outweigh the negatives.

Millhollen, who wasn't old enough to participate in the anti-Vietnam protests, says this is the first time she has participated in this kind of grassroots campaign.

"Democracy is messy," she says. "The homeless and people with mental health problems are a part of our society. How do we take care of that?

Millhollen says the movement has inspired her to read more books on democracy and "bone up on civics".

Supporters also recognize that some people can't get heavily involved in the movement because they have other obligations like work and taking care of their children.

Adel, a single mother, empathizes with these people and sees finding a way to make an impact in the heart of the community as the biggest necessity.

She says people aren't aware of things going on under their noses or how much power they have to change their conditions.

"Occupy is such a simple solution," says Adel. "In Iceland they overturned their government and changed the constitution. Not a lot of people know that."