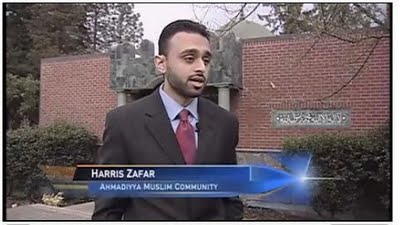 The Skanner News spoke with Harris Zafar about the event, his faith and more public service efforts by the Muslim community in the Portland area.

The Skanner News: Talk about this event you're having Saturday.

Harris Zafar: So we are the Amadiyya Muslim Community, we're the oldest Muslim organization in America, established back in 1920, and we have over 70 chapters around the country. The Portland chapter, incidentally, is also one of the oldest Muslim communities in Portland and built the first mosque ever in Portland, where the blood drive is occurring.

So our community nationwide decided that we wanted to do something extraordinary on the 10-year anniversary of 9/11. And there are a lot of things happening around the country that were one-day events, memorials, and we thought those are great, but in order to show the type of effort that we're willing to put into something extraordinary, we decided to do a month-long campaign.

We know that 10 years ago people were looking at Muslims as causing the deaths of 3,000 Americans. So we wanted to multiply that number by these 10 years and save 30,000 American lives, and we could do that by collecting 10,000 bags of blood, because the Red Cross says that every bag of blood can save up to three lives. We've already organized or hosted blood drives in over 165 cities across the country and here locally we've done blood drives already in Portland, we did one in Eugene, and so this is our last one here. And so we will have done four blood drives this month here locally in Oregon for this campaign which we call Muslims for Life.

And it was for the dual purpose: One is to honor the lives lost on this day 10 years ago and to honor the victims of 9/11 by saving lives. And secondly to educate people that here we have Muslims that are not shedding blood to take lives, they're shedding blood to save lives because of Islam's position on the sanctity of human life.

TSN: Can anyone come and contribute?

HZ: Yes, absolutely, this is definitely not only a collection of Muslim blood. We engage in interfaith outreach as well in order to work with any Americans who would like to make this effort to save lives as a way to honor the victims. So across the country we have done blood drives that are part of the Muslims for Life campaign at churches, and even at synagogues. We even had members of the Jewish community donate blood on Saturdays, even though it's Sabbath for them, but they're so taken by this that they wanted to be part of it. So we've had people from all backgrounds come and donate blood at all our blood drives.

TSN: What are the other things that your community does and are there any other important projects and programs that people should hear about?

HZ: Yes we are the founders of another initiative that we've been doing for almost two years now called Muslims for Peace. It was in early 2010 when we felt like there was this void in the Muslim community – we needed a centralized, concerted voice to counter this ideology of hatred amongst some Muslims. That's why people kept talking about this deafening silence within the Muslim community. So we started a campaign last year called Muslims for Peace, which is now our parent initiative and Muslims for Life is kind of a subdivision of that.

But Muslims for Peace is meant to educate Muslims and non Muslims on Islam's stand on peace. And it's not just one of the things where you can stay at home in the comfort of your home and say, 'Yes, Islam stands for peace.' Here we're taking an active stance for peace by having tens of thousands of Muslim volunteers around the nation walking around on the street, in neighborhoods, downtown, and engaging people.

TSN: What kind of response do you get from people?

HZ; The vast majority are positive responses. We have had some adversarial responses, of people challenging us, saying 'you're not people, you're not peaceful people, what about all of this that the Muslims are doing,' and we're able to have a good dialogue with them, and at the end, we're able to at least shake hands and walk away. There haven't been any bad moments. The vast majority of people have taken the flier from our hands, said 'we're glad you're doing this – we're sorry you have to do this, to stand for your faith.' And so I think here in Portland, I think people have been very open-minded to begin with, and so they've been very receptive.

We have t-shirts on that actually say, "Muslims for Peace," and people have actually walked across the street not because they saw my flier but because of the t-shirts we were wearing. And they came and said, "I love your t-shirt," and were shaking our hands. So it's been very well-received. We actually did that the same day as the attempted bombing in Pioneer Courthouse Square on Black Friday last year. Incidentally just a few hours earlier, we were there, in downtown Portland in that same area, handing out these peace fliers.

And so then the very next day we went back to Pioneer Square, because that's where the whole thing went down. We went there, and we were handing out peace fliers again. So these are things we continue to do, a lot of interfaith activity with huge 9/11 events in partnership with a Jewish congregation and a Christian congregation. We do a lot of interfaith outreach, community service with blood drives and Adopt-A-Highway cleanups or adopt a family at Christmastime.