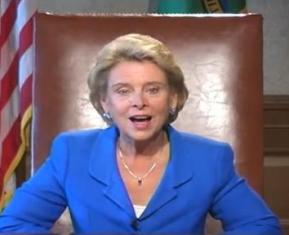 OLYMPIA, Wash. (AP) –Gov. Chris Gregoire has spent part of this summer reshuffling her leadership team, adding two new people to her inner circle, elevating another to chief of staff and naming a new cabinet secretary.

All of them are white.

Gregoire's staffing selections have prolonged a trend that runs contrary to her vow to make diversity one of the chief initiatives of her administration. Minorities now account for more than one-quarter of Washington state residents, but Gregoire's entire senior staff is white and her cabinet of 26 has only two people of another race. TheSkanner News Video:Gov. Gregoire on Diversity

It's a gap that extends to rank-and-file workers. Just 18 percent of state employees as a whole are minorities, according to an AP analysis of state personnel records, and there's even less diversity among managers – only 16 percent of them are non-white.

The numbers are not getting any better: The percentage of minority hires has fallen from 18 percent in 2007 to just under 16 percent this past year.

Gregoire spoksman Scott Whiteaker said the governor understands the importance of diversity and has placed an emphasis on minority recruitment and retention.

"It's a challenge we don't shy away from and strive to continue to improve,'' Whiteaker said.

Supporters of diversity in state government believe an expanded minority presence would help officials better understand and work with the people they serve. Some pointed to a lack of diversity in social services that provide aid to a large segment of minority residents. –

Gregoire herself has long touted the benefits of diversity.

"Because diversity is as important in the workplace as it is in the community, the Governor has selected a diverse staff within her office,'' Gregoire's website says.

But, in fact, less than 16 percent of workers at the governor's office are minorities.

This summer, Gregoire has hired Carol Albert as her director of external affairs and Fred Olson as her deputy chief of staff. She moved Marty Loesch to chief of staff. She also named Bernie Warner as her secretary of corrections. The former workers in each position were also white.

The only two minorities in Gregoire's circle are Eva Santos, who runs the Department of Personnel and John Batiste, who leads the Washington State Patrol.

By comparison, seven of Gov. Gary Locke's 27 cabinet secretaries were minorities in 2004.

Other agencies led by elected officials currently show a broad range of diversity levels, with the attorney general's office that Gregoire once led having just 11 percent minority staff. The Office of the Insurance Commissioner shows minority representation of 24 percent on staff.

Lillian Ortiz-Self, who chairs the state's Commission on Hispanic Affairs, said Gregoire has been supportive of diversity efforts but that her words needs to be backed up by actions.

"It takes a lot more work than just believing in it,'' Ortiz-Self said.

Ortiz-Self believes the state needs to closely examine their policies and procedures in hiring, such as whether recruiting efforts are drawing in minorities and whether those who interview candidates have appropriate diversity training. She also said the issue needs leadership.

"It needs to be modeled from the top down,'' Ortiz-Self said.

Gregoire's decision to try and consolidate a group of minority commissions into a single Commission on Civil Rights also irked members, Ortiz-Self said. The state also halted an annual Diversity Fair celebration in 2010, and instead held it online.

"We could have pushed for more on our end, and I think the governor's staff would have reacted more sensitively to that kind of effort,'' Eason said.