Ministers Draw Crowd of Volunteers Determined to Save Youth from Violence

By Helen Silvis of The Skanner News
Published: 13 June 2011 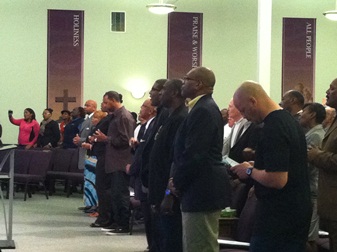 An increase in violence this year, has brought community leaders and grassroots activists together in an attempt to strengthen community networks and support minority youth. African American ministers called a meeting Friday at Life Change Christian Center on 3635 N. Williams St. to coordinate the churches' effort. The Skanner News Video: Dr. Mark StrongThe Skanner News Video: Dr. Mark Strong
The ministers said they wanted 100 people to make a commitment of 45 minutes, once a week for one year. But many more people responded to that call, packing the church and signing up to be trained to help.

Dr. Mark Strong, speaking for the church leaders outlined a four-point plan. THERE "A visible presence," SHARE: "A connecting presence," CARE: "A supporting presence" and PRAYER: "an interceding presence."

"If we can just do a little something, we have an opportunity to make a great difference," said Dr. Strong introducing the plan. We will show our young people that we love them, we care about them, and we are there for them. We want everyone to take part, because violence doesn't discriminate." 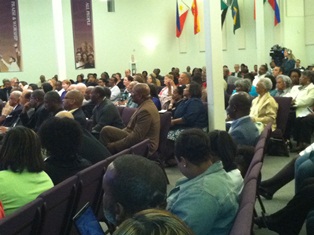 The Four-Point Plan
Adults were asked to commit to one of the actions. Those who choose to be THERE, will create a caring visible presence on the street and everywhere adults encounter youth. 'Connected', the group of men and women brought together by outreach specialist John Canda, is leading this effort.
Those who choose to SHARE will work through the nonprofit mentoring agency Big Brothers, Big Sisters to mentor youth who lack support. Some are young people who have been in trouble with the law. Evidence shows that mentoring is a powerful way to support young people. 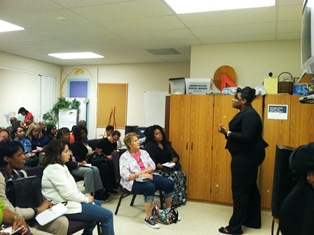 Those who commit to CARE will work with community agencies Self Enhancement Inc. and Cascadia Behavioral Health to support families and children. George Merriweather, support and aftercare pastor, and Serena Stoudamire Wesley are coordinating the CARE group.
Those who commit to PRAYER will do just that, offering a spiritual uplift to the community, through focused, concentrated and consistent group prayers. Bishop Steven Holt will lead the prayer group. 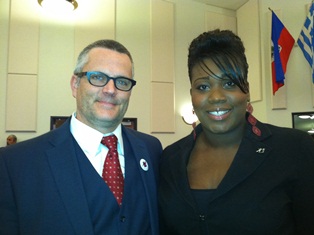 Mayor Adams Details His Plan
Antoinette Edwards, the mayor's public safety advocate helped plan and organize the meeting. She introduced Mayor Sam Adams, who turned out to support the effort and detail the anti-violence strategy he had unveiled earlier in the day at the Gang Violence Task Force. The strategy includes:
Promoting volunteer community efforts, such as the Restore the Village campaign, Connected, and the church leaders initiative
Adding six officers and a sergeant to a reactivated gang enforcement team
Longer federal sentences for more gang crimes
Direct outreach to gang members (No mention of any change to the number of the city's outreach workers -- 10 for the entire city) 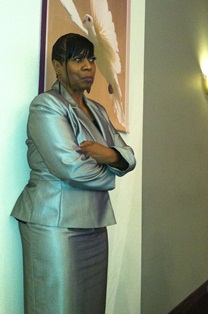 Tougher gun and sex trafficking laws
Safety summits
Activities for youth through the Parks Bureau and the Summer Youth Connect program, which works with targeted youth (1,650 students last year)
"If I never have to see another victim of the violence sweeping through our community it would be too soon," Adams told the crowd assembled in the church. "It is a tragedy that is avoidable and preventable."

Police Say Community Support is Key
That was the message too from Russ Corno, a longtime gang enforcement officer with Portland Police Bureau. Despite more than 40 gang-related shootings this year, the problem is nowhere near the level of the mid-90s, Corno said. In 1997, for example, 13 people were killed by gang-related violence. Portland is equipped to deal with the problem. 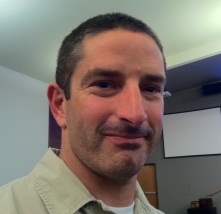 "I can tell you we know how to solve the problem," he said. "I can tell you we can't police our way out of the it…everyone has got to be involved. We have been lacking the community piece so it's very inspirational for me to be here and see all of you.
"Right now we have summer to get through… it's going to take a lot of work to get out there and make sure these kids have something else to do, something to hope for."
Captain Kevin Modica told the community to claim the public space. "Take up the space," he said, "Occupy what is yours. Be a voice of reason."


A Voice for Black Youth 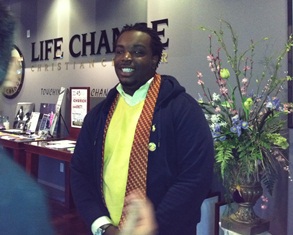 Derriel Ingram, a graduating senior from Benson High School, said peer pressure is hard to resist when adult support is lacking. And he pointed out that students gravitate to gangs in middle school when they are just 11, 12 and 13 years old.

"I've seen my friends go to prison and their lives are pretty much over because when you get a felony on your record you can't get a job," he said. "If you don't have someone on your side telling you 'Don't do it!' then you don't see the point of not doing it."

Derriel, who is the son of Rob Ingram, the director of Portland's Office of Youth Violence Prevention, explained how devastating it is to be viewed as a threat, simply because you are a young Black man. 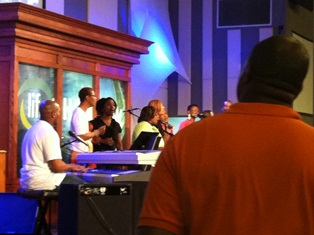 You Can Take Action
John Canda, for Connected, spoke about the power of being a positive, visible presence in the community. Being that friendly caring person for minority youth is a ministry of place and ministry of presence, he said. But he warned against working for others to the point that you neglect your own family. He plans to bring his high school-aged son with him once a week, he said, when the group gathers to offer that visible street presence.. 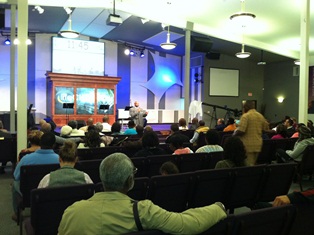 Chabre Vickers, director of community relations and diversity for Big Brothers Big Sisters, Columbia Northwest, talked about the impact of mentors. And the urgent need for volunteers to step into that role. "We have about 2000 children on our waiting list who want a mentor," she said. "They're waiting right now and all we need is you."

Some mentors work with gang-affected youth through the nonprofit's Second Chance program. Mentors are crucial when youth are released from detention, she said, and can make the difference between falling right back into old patterns or leaving the juvenile justice system for good. (UPDATE: Vickers reports that 85 people signed up to join the Big Brothers Big Sisters program. "That's the largest number we've ever had from one event," she told The Skanner News. "It really shows that the faith community is putting their names and faces to where they want to see a change.")

Bishop Steven Holt spoke about the strength of traditional Black culture and the transformative power of prayer. "Prayer is the great equalizer," he said. "It can change the atmosphere, grip hearts, arrest your attention and turn somebody around.

The Need is Great 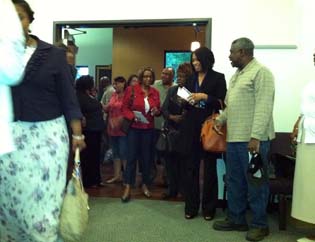 Others who spoke talked about the gap left by absent fathers and mothers and how the community, our 'village', can make a difference both by caring and by taking care of children's needs.
Serena Stoudamire Wesley of Self Enhancement Inc.'s family program, told the CARE breakout group about her work, helping families in need. She told about giving a teen boy $250 to buy clothes – a new experience for a kid living in poverty.
"If you saw what it meant to this kid who had his own money and the opportunity to buy his own clothes for the first time," she said. "He bought underwear; he bought socks; he bought tee-shirts. So if we can be there for him and if we can be there for others, we are making a huge difference. SEI has services that wrap around the whole family." 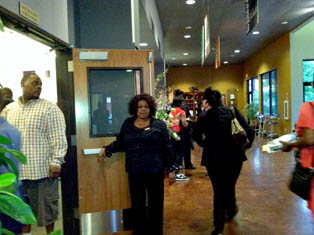 Roy Washington, whose foster son Shiloh Hampton was shot and killed in Holladay Park just weeks ago, said he has been involved in crisis response for more than 10 years. "I never thought that that knock would come to my door," he said. "You don't know what that feels like till it comes to your door. People are afraid to talk to our kids, but all the kids want is a little love.
"It's our responsibility. It's our community. We're the ones who live in this community. … So we're the ones that have to get out there and take our community back."


PHOTOS
From top: Dr. Mark Strong led the crowd in prayer; The prayer breakout group; Life Change Christian Center was packed; Chabre Vickers spoke to the SHARE breakout group; Mayor Adams and Chabre Vickers; Antoinette Edwards was a key organizing force; Officer Russ Corno; Derriel Ingram after speaking about his experience as a young black man; Music united the crowd;  John Canda spoke to the THERE breakout group; Royal Harris signs his commitment card; the crowd represented many congregations; ushers helped guide the crowd to their destinations. Photos by Helen Silvis with The Skanner News I-phone
To get involved contact Antoinette Edwards at 503-823-4779