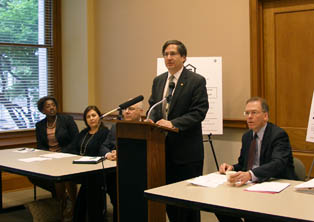 Investigations using undercover "renters" in Portland over the past year have revealed that a number of landlords in the city treat Black, Hispanic and disabled people differently than their White counterparts.

The action plan – which includes a partnership with the U.S. Department of Housing and Urban Development and the Oregon Bureau of Labor and Industries– requires:

1)      A streamlined reporting process through the Fair Housing Council of Oregon and Legal Aid Services of Oregon; increased education for tenants about their rights;

2)      Increased education for landlords about the law;

4)      At least annual testing of whether landlords are abiding by anti-discrimination laws;

6)      A public information campaign aimed at changing hearts and minds about fair housing;

7)      Creation of a citywide housing strategy;

John Trasvina, assistant secretary for Fair Housing and Equal Opportunity for Housing and Urban Development, told reporters that the federal department was not just approving actions to decrease the incidents of discrimination in Portland, but were committed to being a full-fledged partner.

"I'm convinced the city has the will and capacity to tackle this problem," he said.