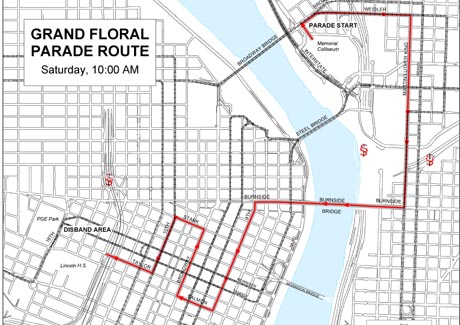 The junior parade will take over the Hollywood District on Wednesday, June 8. More than 10,000 children will continue the tradition set in 1936 to dance, drum, skate, bike, trike, unicike, scoot and stroller down Sandy Boulevard at 1 p.m.

The parade's commercial sponsors will also be there, including the bumbling cartoon detective Scooby Doo, courtesy of Comcast and Cartoon Network, as well as Fred Meyer's Fred Bear and Tillamook's Loafy – the lovable cheese loaf.

The biggest parade of the festival, the Grand Floral Parade, will kick off at 10 a.m. on June 11 at Memorial Coliseum. For those wishing to sit in the Coliseum as the parade disembarks, the tickets range from $15 to $30. The reserved seating will also include admission to the Queen's Coronation from 8:30 to 9:15 a.m. Tickets are available at www.rosefestival.org or by phone at 877-789-7673.

This year's theme is the vintage "Carnival of Roses" which looks back at the first Mardi Gras styled Rose Festivals. There will be 17 floral-covered floats, 17 marching bands and several dancing groups, all lead by the brass marching band, Patrick Lamb and the Mississippi Horns.

Loco-Motion by Union Pacific – celebrating transportation led by Union Pacific's mini-train, the 1956 locomotive that serves as the goodwill ambassador for the train line. Students from the hearing impaired school Tucker-Maxon Oral School will be riding as passengers.

Carousel of Cultures by Boeing – celebrating the myriad of cultures present in the Pacific Northwest.

After the parade, the floats will be on display adjacent to CityFair on S.W. Naito Parkway.

On June 11, parking at the Rose Quarter is $8 for 8 a.m. to 2 p.m., although parking after 8 a.m. will not be allowed. Attendees are encouraged to use TriMet.