With Asthma Rates Up, Activists Struggle on Education, Advocacy

Lisa Loving of The Skanner News
Published: 26 May 2011 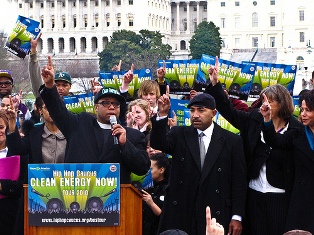 To an asthma sufferer nothing is like the panic of an attack – you can't breathe, you can't control your body. If the attack is really bad, you can die.

The Centers for Disease Control reported this month that asthma rates are up for every demographic category they track
– but it's rising fastest among African American children, 17 percent of whom live with asthma.

For activists around the country working to bring attention to rising asthma rates, the current state of environmental research and regulation are standing in the way of their work simply to educate local communities about the root causes of the illness.

"People know what's wrong with them – everybody has a nebulizer, everybody has asthma, they're preaching for cancer survivors in their church or in their mosques," said the Rev. Lennox Yearwood this week. "They know they have a problem, but they aren't connecting that sometimes with corporations who are not being regulated the way they should be."

Yearwood, founder of the Hip-Hop Caucus and the subject of a new documentary film on the Discovery Network, was in the Northwest last weekend for Seattle's Green Festival.

"It doesn't matter what color you are, Black or white, or brown or yellow—and mainly those in urban communities -- people don't have the information or aren't quite connecting the dots."

In a 2009 report in USA Today, the newspaper drafted researchers and scientists at the University of Massachusetts-Amherst, Johns Hopkins University in Baltimore, and the University of Maryland in College Park to dig into how deeply children across the country have been exposed to industrial pollution at their schools.

The report also named industrial facilities in each community that the experts deemed specifically responsible for the air pollution emissions – as a separate factor from the car exhaust generated from the nearby highways and high-traffic corridors.

The point of the effort, USA Today said, is that children are more sensitive to environmental toxins – especially those that are linked to asthma, cancer and other deadly diseases.

The study showed that Pacific Northwest schools – particularly in Pendleton, North Portland and Northwest Portland in Oregon; and in Monroe and Tacoma, Washington – have air pollution rates ranking in the worst one percent in the nation.

"It created this alarming picture about how we had – because there are no regulations around school sitings on contaminated land or really anything that has to do with environmental health – that we had a picture of schools being sited in pretty toxic areas," she said.

In response to the USA Today article, the Environmental Protection Agency pledged to monitor the problem by choosing 63 schools nationwide and reporting back to their communities.

In a Portland-area report back in late April, EPA officials said air quality at the Oregon schools was not bad enough to cause long-term health problems, but "slightly elevated" cadmium levels detected at Tubman will be monitored.

(The Washington state reports are not completely finished, according to the EPA's website.)

"Measured levels of manganese and nickel in the air at the school are below levels of concern," the report said.

"Measured levels of acetaldehyde, benzene, and 1,3 butadiene in the air are below the levels of significant concern suggested by previously available information."

"I get the proportionality of industry versus the bigger transportation issues that we have, with this huge corridor of freeways -- and the back of Harriet Tubman is directly above I-5, right where it flows into the Rose Quarter, 131,000 vehicles a day pass that," Peveto says.

"And the EPA is saying, basically, there's no long term problem?"

The new film, "Hip Hop Rev," chronicles one year in Yearwood's life traveling the United States and advocating for heightened regulations on energy emissions; in the end his crusade fails, as he repeated several times during his interview with The Skanner News.

But laying the groundwork for future environmental organizing in low-income urban communities is just the beginning, he says.

"A lot of our communities are dealing with a lot of other issues – everything from economics, jobs, things such as education, health care, police brutality," he said.

Yearwood says a critical tipping point for communities comes when local residents learn about nearby factories, industrial plants and landfills that they never thought about – even though whole families might suffer from asthma, and relative after relative succumbs to cancer.

"A lot of times people don't understand how the pollution and particularly the health effects – which include asthma and cancer – combine with everything."

Yearwood says a key point in environmental justice as an urban movement is showing communities how to change policy – which is hard to do.

"Because if we just get them mad about it and say this is messed up, you're in this community and you're being polluted more than other communities, that's tough," he said. "We were pushing for clean energy legislation last year, and we lost pretty bad as a matter of fact."

Find out more about Rev. Lennox Yearwood's documentary at www.HipHopRev.com .

In Portland, find out more about these issues through Neighbors for Clean Air on Facebook.