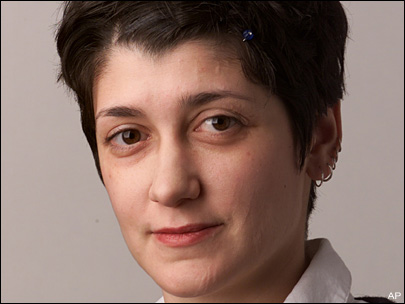 Al-Jazeera said Wednesday that Syrian officials had informed the network of the whereabouts of Dorothy Parvaz, 39, a former reporter for the Seattle Post-Intelligencer.

She was last seen leaving the Qatari capital of Doha on April 29 for Syria to report on the uprising there. On May 4, Al-Jazeera said Syrian authorities confirmed she was detained. A week later, on Tuesday night, Syria said she had not been in the country since May 1, without explaining where she had gone.

There was no immediate comment from officials in Iran, but the apparent jailing of Parvaz highlights the increasing pressures and clampdowns against journalists trying to covering the uprisings against the autocratic regime of President Bashar Assad in Syria and others across the region.

Sending Parvaz to Iran - if true - also could reinforce allegations that Iranian authorities are working closely with Assad's government to crack down on protesters and choke off independent media coverage.

A statement by Qatar-based Al-Jazeera urged Iranian authorities to provide details on Parvaz, who works for the news network's English-language channel.

"We have now received information that she is being held in Tehran," the Al-Jazeera statement said, adding that the network is "deeply concerned" for Parvaz's welfare.

The State Department in Washington also expressed concern, and said it was striving to get further details about Parvaz's situation.

"We continue to ask and press the Syrian authorities for more information regarding the circumstances of her deportation," said department spokesman Mark Toner. "We're obviously concerned about her well-being, as an American citizen, and are working to get more detail."

He said U.S. officials were seeking assistance from Swiss diplomats who represent U.S. interests in Iran.

Al-Jazeera said the information about Parvaz being in Iran came from Syrian officials who had previously told the network the journalist was being held in Damascus but that she would be released.

"We are calling for information from the Iranian authorities, access to Dorothy, and for her immediate release," the network said.

In Canada, Parvaz's father, Fred Parvaz, told The Associated Press that he had learned of his daughter's possible transfer to Iran from Al-Jazeera managers. He said he hoped to speak with Canadian authorities about her later Wednesday.

"Being an Iranian citizen, of course, helps," he said. "If she's in Iran, they have a responsibility to treat her with respect. She's going to be treated with dignity."

He said he would travel to Iran if it is confirmed she is there and if he felt he could help.

Her fiance, Todd Barker, who is with Fred Parvaz in Vancouver, British Columbia, told the AP that despite Syria's announcement that she had left the country, "we have not heard from her."

The New York-based Committee to Protect Journalists said Syria is holding at least five local and foreign journalists as part of an "ongoing repression of the media." Elsewhere, regimes have waged widespread crackdowns on the media as they struggle to hold onto power.

In Libya, foreign journalists working in the capital Tripoli are under strict controls by forces loyal to Moammar Gadhafi. In the Gulf state of Bahrain, opposition media has been closed and journalists and bloggers arrested as the U.S.-allied monarchy tried to muzzle dissent.

Syrian officials, too, have sharply limited media access to the country during an ongoing uprising against Assad's regime.

She previously worked as a reporter and columnist for the Seattle Post-Intelligencer.

Parvaz's detention has highlighted the worsening relations between Syrian authorities and the Qatar-based TV network.

Al-Jazeera reporters had been allowed to stay in Syria as other reporters were expelled, but two weeks ago the station said it was scaling back its Syrian operations, citing harassment by security forces.

Associated Press writers Charmaine Noronha in Toronto and Matt Lee in Washington contributed to this report.