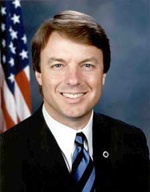 Former vice presidential candidate John Edwards, who is mulling over a run for the presidency in 2008, called for withdrawal from Iraq within the next 18 months, and for the U.S. government to launch another war — on poverty — in a speech Friday at the National Organization of Black Elected Legislative Women's conference.
Edwards, a former Democratic senator from North Carolina who now directs a poverty research center at the University of North Carolina, couldn't resist a few partisan jabs at the current administration, calling the aftermath of Hurricane Katrina "a failure of presidential leadership."
His comments drew applause from the largely Democratic conference attendees, who cheered Edwards' calls for a rise in the minimum wage, expansion of earned income tax credits and expanded regulations for the check-cashing industry.
Edwards also said it should be easier for workers to join unions.
"If Republicans or Democrats can join a political party by signing their name to a card, any worker should be able to do the same thing with a union," said Edwards, who was on the 2004 ticket with Massachusetts Sen. John Kerry.
In a recent poll of Iowa Democrats, Edwards ranked at the top of a list of potential presidential candidates, outpacing New York Sen. Hillary Clinton. Iowa is host to the nation's first political caucus and often plays a key role in determining the nominees for the major political parties.
State Sen. Jackie Winters, a Republican from Salem, said after the Friday speech she would have liked to hear more specifics about job creation from Edwards.
"Politicians are good at doing platitudes," said Winters, whom the Bush administration recruited to challenge U.S. Democratic Rep. Darlene Hooley in 2004, but who wound up losing the GOP primary. "I think the creation of jobs is what ends poverty. If you have a job, you don't need someone else to do things for you."
Edwards' speech offered a preview of some of the talking points Democrats will use on the campaign trail this fall in an effort to win back control of Congress: He called for universal health care coverage and for development of wind and solar energy sources, and he said he regretted his vote authorizing the president to declare war in Iraq.
Edwards also has a focus on poverty, a carry-over from the "two Americas" theme he sounded during the 2004 campaign and makes consistent mention of the approximately 37 million Americans who he said live at or below the federal poverty line.
"The hurricane showed the face of poverty in this country," he said. "The whole world saw those pictures from New Orleans. Is the richest country on the planet going to turn its back on 37 million people?"
In response to questions from reporters after his speech, Edwards said he considered Oregon a progressive state but said he still considered it contested.
Edwards and Kerry won Oregon in 2004 with 51 percent of the vote to President George W. Bush's 47 percent. Out of the state's 2 million registered voters, there are about 780,000 registered Democrats, versus about 728,000 registered Republicans, according to the Secretary of State's office.
— The Associated Press