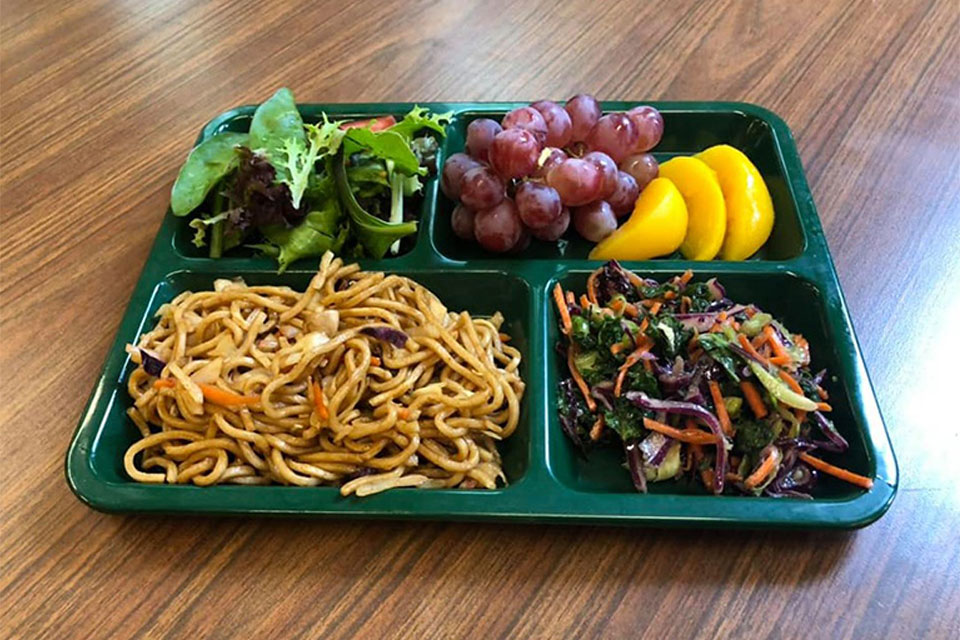 A meal that started as a cultural celebration at one of Portland Public Schools’ dual language immersion schools has now gained national recognition as one of the best meals served at a K-12 school in the United States.

The lunch, which was served district-wide in May, features locally-made noodles with chicken and shredded cabbage in a yakisoba sauce, alongside fruits and vegetables. This meal, like every PPS school meal, is served with unlimited fruits and vegetables that rotate seasonally.

“We feel this is a great example of two of our values—community partnerships and local purchasing,” said Whitney Ellersick, Senior Director of Nutrition Services.

Nutrition Services, which sets PPS’s district-wide meal menu, uses locally sourced ingredients when feasible, taking advantage of Oregon’s Farm to School Grant. The yakisoba meal is anchored by noodles from a local company, Umi Organic. It started as part of a cultural lunch at Richmond Elementary School in SE Portland, which holds annual or twice-a-year Japanese lunches. Richmond is the district’s Japanese immersion school, where students learn in both English and Japanese.

The lunches, which started in 2015, included such Japanese meals as a curry dish with chicken and vegetables over rice. The yakisoba was a student favorite, and Nutrition Services wanted to add the meal to its Local Lunch Days program that features a monthly meal made with local ingredients.

“We found it was so popular and successful in our kitchens and operations that we decided to try and make it happen district-wide,” said Ellersick.

Before yakisoba could be added to the rotation, PPS had to find a noodle that would comply with the United States Department of Agriculture’s nutritional guidelines, a requirement because the USDA funds school meals in PPS. That meant the noodles had to be 50% grain rich.

Umi CEO Lola Milholland and her staff took on the challenge, and after plenty of trial and error, they found the magic formula in a combination of Durum and Edison wheat from Camas Country Mill in Junction City. Because PPS kitchens primarily cook with ovens, the noodles had to be able to withstand that heat, and Umi found a combination of boiling and chilling in making the noodles that allowed them to be prepared in an oven on lunch day.

For Milholland, having her noodles in PPS brought her full circle. She attended Richmond, part of the second group of Japanese immersion classes.

Portland Public Schools, founded in 1851, is a PK-12 urban school district. With more than 49,000 students in 81 schools, it is the largest school district in Oregon. Learn more at the PPS website.