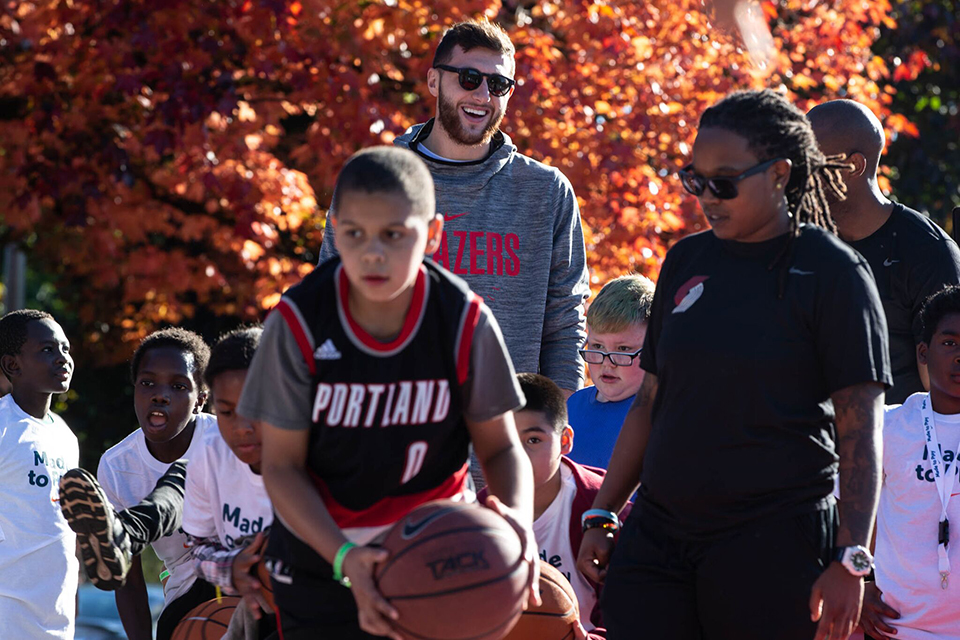 Thursday, kids in outer southeast Portland gathered at Portland Parks & Recreation’s Parklane Park with Nike, the Portland Trail Blazers, Portland Parks Commissioner Nick Fish, Mayor of Portland Ted Wheeler, and guests to celebrate the beginning of the 2018 Portland Basketball Courts Revitalization Project. This three-year project, announced in June, will refresh and upgrade outdoor basketball courts in up to 30 Portland Parks & Recreation sites – including Parklane Park, one of the first to be revitalized – thanks to a more than $1 million donation by Nike and the Trail Blazers.

“Portlanders are rightfully proud of our world-class parks and recreation system. And basketball courts are a place where people of all ages and backgrounds gather and play,” said Portland Parks Commissioner Nick Fish. “Thanks to our strong partnership with Nike and the Portland Trail Blazers, our courts are getting a makeover.”

From now through 2020, basketball courts in up to 30 parks in Portland will be repaired and refreshed with new paint and a new design featuring the name of the park. Repairs to the court surface and replacement of backboards and hoops will take place as needed. The general contractor for the project is Verde Builds, a program of Verde, an innovative Oregon nonprofit organization that serves communities by building environmental wealth through social enterprise, outreach and advocacy. The builder is local company Pacific Ace, LLC.

Nike’s contribution to the 2018 Portland Basketball Courts Revitalization Project is a one-time donation of $750,000 to Portland Parks & Recreation, administered by Verde, to be used for the revitalization of the courts. The Portland Trail Blazers will donate $100,000 a year for the next three years (2018-2020). Nike and the Trail Blazers will also continue to support youth programming on the courts.

The event also celebrated the news that four more basketball courts at Argay Park, Harney Park, McKenna Park and Trenton Park will open this month, with the other revitalized courts to be ready within the next year.

“We’re excited to debut the new court design, and begin the full process of restoring and renewing courts across the city. This project means so much to us – not only is it continuing our long-standing commitment to Portland and the initial court resurfacing project we embarked on more than 15 years ago, it speaks directly to our beliefs in the power of sport to create equal playing fields and that all kids are made to play,” said Caitlin Morris, Nike Global Community Impact General Manager.

This project is a continuation of the 2002 Nike Anniversary Project in which the company donated more than $2 million to the Portland Parks Foundation, in celebration of its 30th anniversary, to resurface outdoor basketball courts at 30 park sites in 75 days, as Nike’s way of thanking the Portland area for being its home since 1972.

“Our partnership with Nike continues to be among our strongest, and this effort to refurbish courts around the Portland area to make basketball widely accessible is a major achievement,” said Chris McGowan, President and CEO of the Trail Blazers. “We thank Portland Parks & Recreation and Verde for their pivotal roles, too, in selecting the locations across our community with the most need. The investments of time, effort and resources by all involved will have a positive impact for many years.”

Said Mayor Ted Wheeler, “Nike and the Portland Trail Blazers are tremendous community partners, and the City of Portland is extremely grateful for their ongoing commitment to our community, and for their passion to renew our city’s basketball courts. This is an incredible gift – not only for those who live here, but for those who will visit and fall in love with Portland, too.”

The order in which the original 2002 Nike Anniversary Project parks are being revitalized is determined in large part by a Vulnerability Index, a point system based on the estimated aggregate demographics of a service area, as compared to citywide Portland estimates. Demographics of interest include persons under the age of 18, households below poverty status and people of color.

Currently, Portland Parks & Recreation and Verde are evaluating the courts and determining the revitalization work schedule. Parks that were a part of the original 2002 Nike Anniversary Project and now under consideration for the 2018 Portland Basketball Courts Revitalization Project include (in alphabetical order):