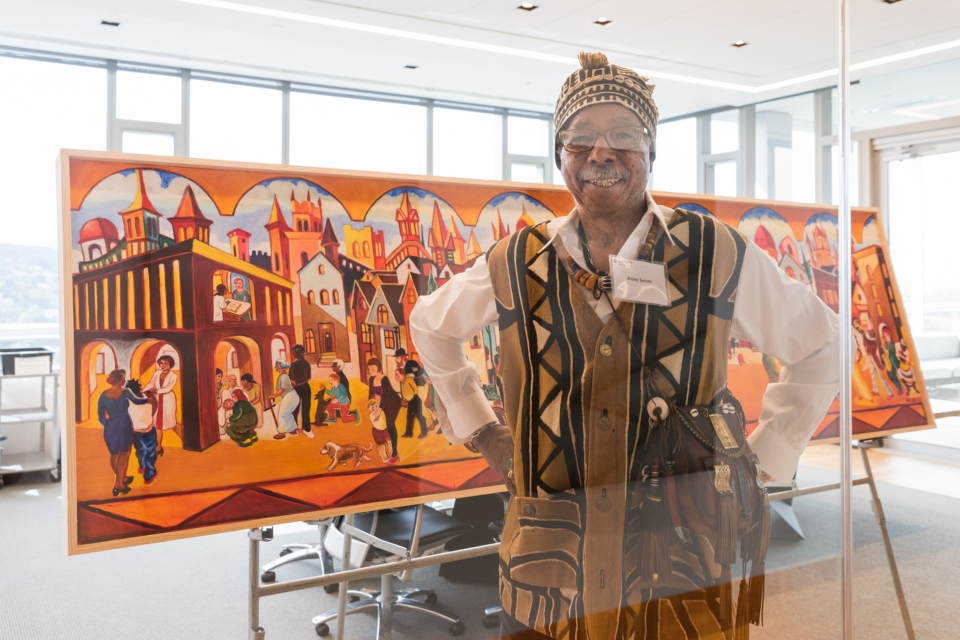 Cascadia Behavioral Healthcare supporters got a closer look at the artwork that will become part of the new Garlington Health Center at a special event hosted by Stoel Rives on May 30. On view were paintings, which will become art murals, designed by Portland artists Arvie Smith and Jeremy Okai Davis, as well as a replica of a donor tree sculpture by Hilary Pfeifer.

“We’ve planned since the beginning to have artwork that reflects our work and our community,” said Cascadia President and CEO Derald Walker. “The art plays an important part of this new health center model.”

Mr. Smith spoke at the event, and shared his thoughts on the creation of his 40-foot mural, “It was important to me to bring back the diverse and distinctive skyline shapes and symbols that were once part of the Albina and Elliot neighborhoods.” Some of his influence came after a trip to Italy where he was inspired by the Giatto frescoes.

The mural, titled “Albina. My Albina.” shows shapes of the churches – like Mount Olivet,  the oldest African-American Church in Portland – and the cupola that once stood above the Williams and Russell Streets intersection and is now in Dawson Park. Musicians, residents and Reverend Garlington himself are depicted in the work.

Mr. Davis’ mural series of hands, to be crafted in porcelain, enamel and steel, will welcome visitors and clients to the new health center. The hands are symbolic of the Garlington staff members welcoming and assisting clients.