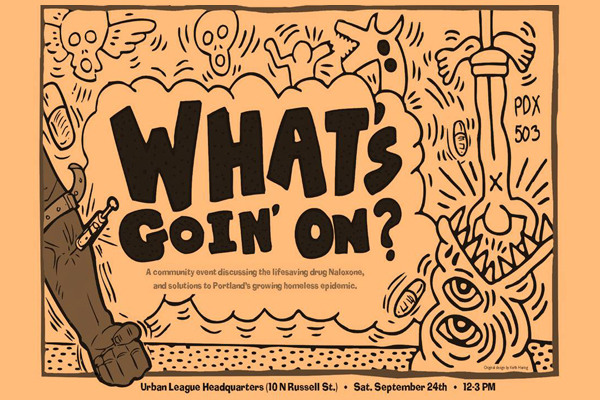 Record-high drug usage is devastating communities across the Portland-area in tandem with a worsening homelessness problem. The crisis is leaving families, community members and elected officials feeling on-edge as methamphetamines and the rising popularity of prescription med abuse wreaks havoc on the city. In the Black community, the problems are even worse.

In response to the troubling trend the Urban League of Portland is calling community to their north Portland headquarters Sat. September 24 to present “What’s Goin’ On?”, an event to provide tools and resources for all to aid in the fight against opioid abuse and homelessness, especially in the Black community.

“The Black community has to have awareness around this life-saving tool, and so do others. Yes heroin is a problem, but the stigma of opioid use in our community needs to be talked about too," Landford said.

She continued adding that by inviting a wide spectrum of other organizations like NAYA, CODA, Outside In and others working with vulnerable populations they League will be able to cast a broader net of information into the community around the crisis.

The event, coincidentally taking place during what President Obama declared as Prescription Opioid and Heroin Epidemic Awareness Week, will bring together pharmacists, police officers and a wide spectrum of organizations invested in a healthier, stronger and more equitable Portland to share ongoing research the League’s conducting on how this trend is affecting its Black residents.

“The growing houseless crisis and opioid crisis are closely related, in that their faces are changing’” says Urban League housing specialist Donovan Smith. “We often think of homelessness and similarly drug usage as being out on the streets using, but truth be told more and more people without a permanent home are staying indoors with friends and family but are still homeless. The opioid spike we’re seeing today, yes some of these people are out on the streets using, but many of them are indoors and hooked on prescription meds -- it’s a different beast."

Who: Urban League of Portland
What: Community awareness event around opioid epidemic and Naloxone titled “What’s Goin’ On”
When: Sat. September, 24 12:30-3:30
Where: Urban League headquarters, at 10 N Russell St. Portland, OR 97227