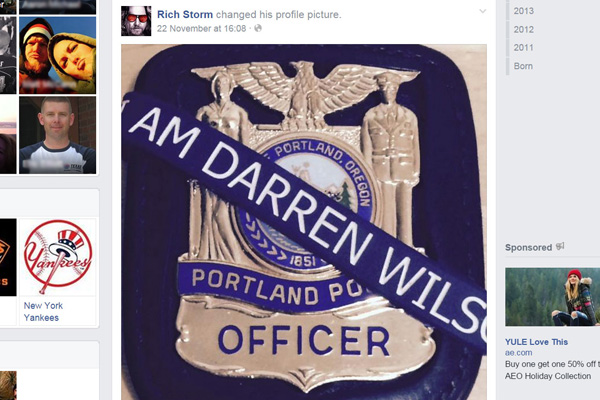 "I was alerted to these images this morning and immediately ordered their removal through the officers' chain of command. The image displayed does not represent this organization and was very inflammatory in nature," said Chief Mike Reese. "Officers certainly have a right to have and express their opinions but not using an official badge of the Portland Police Bureau. The badge represents all members of the organization, past and present, and is an important symbol in our community that must not be tarnished. I've asked the Professional Standards Division to review this matter for possible policy violations."

We learned this morning that three officers altered images of the official Portland Police Bureau badge. Chief Reese did the right thing by immediately ordering the officers to remove these symbols, and by ordering Professional Standards Division to review this matter for possible policy violations.

We have been actively participating in collaborative dialog with community leaders and other Portlanders on issues of police and community relations. Recently, police participated in specific dialog related to possible reactions to the upcoming release of a verdict from the grand jury in Ferguson, Mo.

The actions taken by these three officers here in Portland do not help get us to that goal.

The officers made a political statement by altering the city’s official badges. They were wrong to do so. Their actions do a disservice to the hundreds of Portland Police Officers who are building relationships and partnerships with the community every day.

I urge officers to follow the guidelines issued by my office, and by the Portland Police Bureau command staff, to work with our community in the days to come, cooperatively, and to address the very real issues of police and community relations.